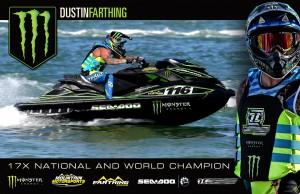 IJSBA is pleased to share the following news, from BRP Sea-Doo, regarding the return of Dustin Farthing to their race program:

Valcourt, QC, CANADA– April 7, 2016 – BRP is taking watercraft racing to the next level in 2016 with the Sea-Doo X-TEAM race programs and the return of an all-star roster of Pro watercraft racers led by the winningest runabout racer of all time, Dustin Farthing.
The introduction of the new Sea-Doo RXP-X 300 and RXT-X 300 watercraft models has performance fans excited for the start of the 2016 riding season, and BRP is supporting the racing community with multiple programs. The 2016 Sea-Doo X-TEAM Bounty program provides all Sea-Doo riders competing in the various disciplines of watercraft racing in North America the opportunity to earn contingency money throughout the season. BRP is also ensuring there are more competition-focused events through the Sea-Doo Promoter support program, sponsoring race events across North America.
BRP will sponsor premier racing events including the P1 AquaX Series, IJSBA tribute events, IJSBA World Finals and others and will see a stacked team of veteran Pro racers representing the Sea-Doo X-TEAM in 2016. These racers include Claude Clayton, Anya Colley, Erminio Iantosca, Eric Lagopoulos, Tim Neff, Anthony Radetic, Troy Snyder, Blaine Spooner and the return of champion Dustin Farthing. Farthing is a 17X National and World Champion and has chosen to compete on a Monster Energy/Mountain Motorsports backed Sea-Doo RXP-X 300 for 2016.
“I'm very excited to return to racing and competing on a new Sea-Doo RXP-X 300 watercraft,” said Farthing. “I raced aboard Sea-Doo watercraft in 1997 & 1998, and won two National and one World Championship. With the help of Monster Energy and BRP, the idea of coming back to racing after two-years of focusing my energy on my six BRP dealerships is now a reality. I'm looking forward to return racing for this great manufacturer and the X-TEAM to earn championships in 2016.”