IJSBA reports from the second day of the 2014 Thai Airways King’s Cup in Pattaya, Thailand. 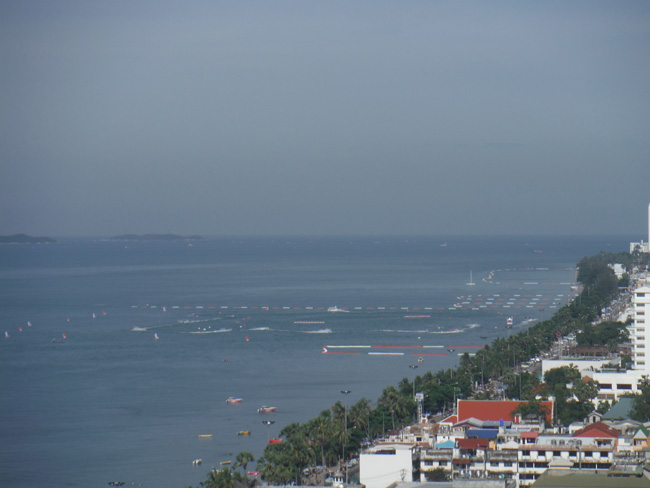 Day two of the 2014 Thai Airways King’s Cup was the first actual day of racing.  The days start, as they normally do, with the bulk of the event’s participants, and their families and crew, meeting for breakfast, and discussing the upcoming motos.  A good portion of competitors do not race until Saturday, and were able to enjoy a night out on the town after the previous evening’s opening ceremony.  The conversations at these tables often involve softer speaking voices and hands partially covering smart phones.  This is understandable, late night visits to temples, or other places of worship, are often private experiences which people tend to share with only those very close to them.

Staying at the D Varee Jomtien Beach is an event in itself.  The host hotel is the choice of stay for nearly all event attendees.  Aside from the comfortable amenities, being able to run into so many friends and colleagues, in the same location, to share a quick chat and catch up, is one of the best parts of King’s Cup and the spacious and comfortable hotel makes this possible.  The host hotel is just a few minute tuk tuk ride (or a seven to ten minute walk) to the race site.  Along the way you pass many tourists enjoying their holiday while street vendors tempt them with the smells of charcoal barbecued meats and steamed fresh seafood.

The track, in 2014, was a standard dual split start that goes into a left hand first turn.  The right side of the course is several long sweeping turns.  The grandstands offer great viewing for those who have access.  Curious members of the public, who did not want to wait in line to get a wristband, peek through the pit tents and vendor booths to try and get a glimpse of the action.  Adjacent to the grandstands is a large exhibitor area stocked with the likes of Jettribe, Sea-Doo, Jet Pilot, Yamaha, Quadski, Belassi, and a vehicle company called Force.

One of the most exciting classes to watch was the Pro Am Spark Stock Class.  This class really looks like it is starting to take off.  Nearly a full line started in moto one.  Perhaps the thing that is most fun to watch about this class is how all of the racing stays pretty tight.  One competitor did get a good start, and pulled away from the holeshot, but the lead never widened much more afterwards.  Most racers were within just a couple of boat lengths of each other.  These Sparks are still difficult to get which probably was the defining reason that all but one of the riders were Thai. Katunyou Chomim, of Thailand, wont both moto one and two.

Novice Runabout Stock was the only class requiring a qualifier.  The two qualifiers and last chance qualifier were all run back to back, with a 30 minute break before the LCQ.  That that didn’t make the cut were done very early in the day.  Seven people would become spectators for Moto one.  These seven would not include China’s Liu Yicheng, who won the first heat, or Thailand’s Pimcharoen Nontawat who would win heat two.  Kristiyan Krivo, of Bulgarion would take the LCQ.  The moto one winner would be Bryan Chai Wai Yuen from Malaysia.  So far, each component of this class would yield a winner from a different country.

Poland would take the moto one win by Kacper Kania in Novice Ski Stock as he would also win moto one of Junior Ski 11-13 Stock.  Moto two of Novice Ski Stock would go to Estonia’s Matren Manni but Kania held on to win moto two of Junior Ski..  Bryan Chia Wai Yuen also would repeat to sweep both motos of Novice Runabout Stock.  Japan’s Jun Ikomi would take the moto one win of Expert Veterans Runabout with Rainer Eidner, out of Germany, taking Moto two.  Thailand would have its first sweep in Amateur Ski Limited with Warchara Sukhom taking the checkered in both motos.  This was followed up in Expert Runabout Limited when Timponghon Khensri pulled the same result.  Thai riders won all remaining heats.  Phaisit Sapermsup won heat one of Amateur Runabout 800 Limited with Thipmongkol Khemsri taking the win in moto two.

There was a nice downpour during the lunch break which sent a few competitors scrambling from their al fresco dining.  The rain would clear by the end of lunch before coming back, with a vengeance, in the last two motos of the day.  Racing was postponed for a few moments to let the downpour clear.  Die hard 800 class riders stayed on the line braving the cold water until competition resumed – everyone else went for shelter!!!  Not much else to report as there are two motos remaining in all of these classes.