IJSBA has received this notice from the organizers of the  European Freestyle Championship.  This year, they are adding a Western and an Eastern United States competition to their 2016 offerings.  Here is their official statement:

Organizers of IJSBA European Freestyle Championship are glad to announce bringing of freestyle-only tour also to USA in 2016.

As for the third qualifying round and Super Final, EFC will join IJSBA Euro Finals in Closed Course and Endurance Racing in Nysa, Poland.

We are happy to announce that west coast round of 2016 US IJSBA Freestyle Championship will take place in Lake Havasu City, Arizona.

East coast round will be hosted in North Fort Myers, Florida.

See this poster of the event: 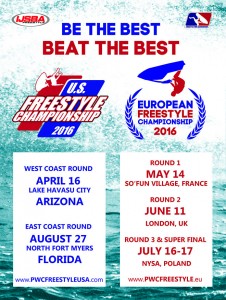