2017 Freestyle US West Results And Recap 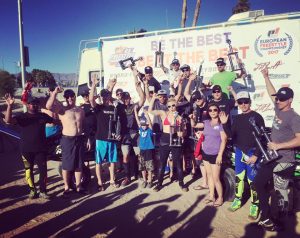 IJSBA is please to release the report and results from the opening round of the US Freestyle Tour.  Competitors were able to compete under Lake Havasu City's famous London Bridge.  A complete story is below.  Congratulations to Iceman for another well executed event as well as to all participating Freestyle athletes.

USFC is a new format of competition that separates freestyle from high speed racing on personal watercraft.

All athletes perform a 2 minute routine and are judged by five different judges, each per one criteria: variety, difficulty, execution, flow and number of tricks.

Record breaking 22 freestyle athletes from not only Arizona, California and Nevada but also Virginia and Alaska took part in the event

making it biggest national freestyle competition in the USA.

All results can be find on the official website: www.pwcfreestyleusa.com