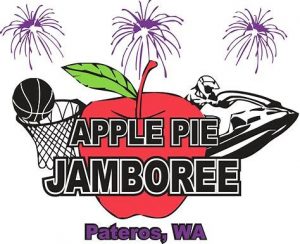 The Apple Pie Jamboree is one of the most fun events in the Pacific Northwest.  It mixes some great American tradition with IJSBA Sanctioned Watercraft Racing.  Roger Harnack, the event organizer, has done a great job of keeping this amazing event going on.  Please see the official press release below:

The city festival is anchored by watercross racing on the Columbia River, but it also includes a bass fishing tournament, 3-on-3 basketball, the Color Run, a parade, motorcycle run, food, entertainment and fireworks.

Racers can camp for free in the city’s Methow River boat launch park, just a short walk or ride to the race site at the confluence of the Methow and Columbia rivers.

The Apple Pie Jamboree is the Northwest Jet Sports Association’s longest-running event; this will be the eighth year watercross racers have been invited to participate.

“This is by far our best venue and event every year,” Harnack said, noting the 95-degree plus temperature and cool Columbia River provide for a perfect weekend of racing.

The event usually draws more than 45 racers who bring nearly 100 skis to the small town of about 400 residents.

“Everywhere you look, there are skis,” Harnack said.

There will be a variety of classes for runabouts, sport boats and skis, as well as gender and skill level, Harnack said.

Registration opens Friday evening in the camping area and continues Saturday morning. Racing kicks off about noon Saturday at the conclusion of the Apple Pie Jamboree parade and the presentation of the National Anthem, both on and off the water.

Racing continues until late Saturday afternoon, when the race site closes for the town’s evening of music and fireworks, put on by the city of Pateros and the Apple Pie Jamboree Committee, led by organization president Tracy Miller.

This year, International Jet Sports Boating Assocation’s Blake Corning will be assisting with the race that also traditionally draws a few racers from British Columbia, as well as Oregon, Washington and Idaho, Harnack said. Volunteers that put on the event include Bill and Dawn Cox, Jen Effrig and Angela Clements, among others.

The Apple Pie Jamboree is the first of two association events — the second is the international Lake Osoyoos Cup.

On Aug. 4 and 5, watercross racers will converge in Deep Bay Park in Oroville, Wash., for the Lake Osoyoos Cup.

The Oroville Chamber of Commerce is building a town festival around the racing action on beautiful Lake Osoyoos, which lays half in Washington state and half in British Columbia. (American racers do not have to enter Canada to get to the race site on U.S. Highway 97.)

For more information on either event, contact Harnack at rharnack@gmail.com or text him at 360-461-7347.