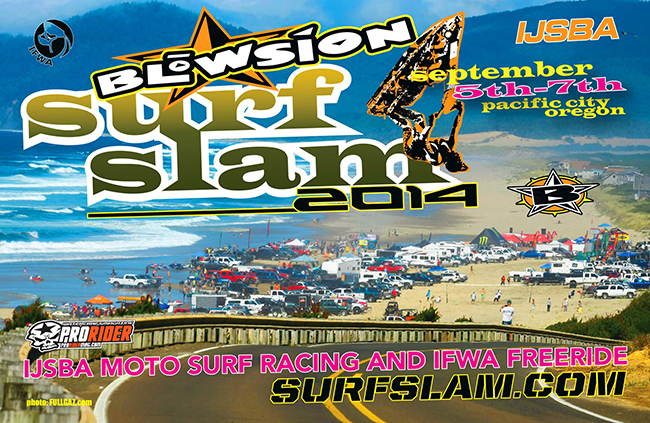 The rolling September surf at Tierra Del Mar in Pacific City Oregon will once again be the location for this year's top USA and International Freeride Watercraft surf event. Pacific City will be the final and deciding Freeride World Tour stop where the cuffs come off, punches will be pulled and waves will be ripped. With 3 of the 4 international rounds of the 2014 IFWA Freeride World Tour already behind them, there is a swarm of Pro Watercraft Freeride Athletes in the running for winning the overall World Champion crown. Professional athletes and their amazing surf machines are trekking in from not only all points of the USA and Canada but also South Africa, Costa Rica, Argentina, Australia, Brazil, United Kingdom, Japan, France, Italy and all points around the globe.

The Blowsion Surfslam is held at Tierra Del Mar Beach access located just north of Pacific City, Oregon and is free to the public. The Surf Slam brings over 100 top professional and amateur competitors from around the world competing for a cash purse and accrued points for the IFWA World title. Joining them will be some of the premium USA PWC racers exhibiting unreal high speed turns and jumps through a grueling race buoy course in pursuit of the IJSBA Motosurf Western Championship while being confronted by the Pacific Coast's always unpredictable wave sets. 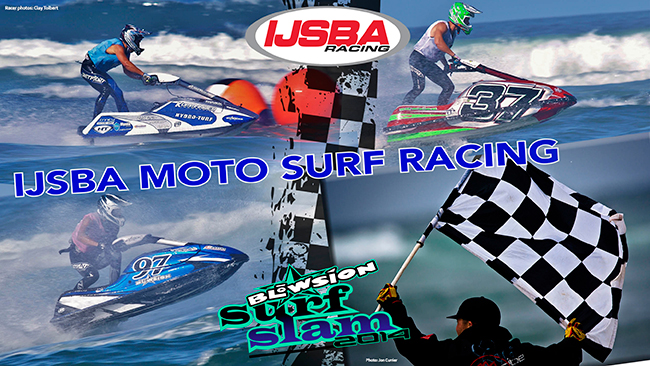 Pro and Amateur Freeride competitors will compete in a head to head double elimination format. A panel of professional judges score these amazing athletes based on 50% for their wave surfing, and 50% for their aerial maneuvers. The IJSBA, in its support for the IFWA, will award the winner of this round with the IJSBA Freeride World Cup. The notoriously unpredictable Oregon Pacific Coast surf will launch freeride competitors over 20+ feet in the air while performing surf combinations featuring multiple rotation backflips, Madonna rolls, Superman backflips, Nac-Nac’s, Scarecrows, inverted barrel rolls, floaters, Goat Chokers, look backs, aerial re-entries and no handed landings. Spectators will also witness intense Pro and Amateur personal watercraft racing with the IJSBA Moto Surf Invitational. These agro racers will compete in a Multi-Moto head to head race format of several laps through a buoy course requiring a balance of maintaining high speeds while making split second strategic maneuvers around left and right turn buoys as well as other racers. All while trying to keep from being crushed by the intense Pacific Coast wave sets.

This event is a three day weekend of surf and beach action. The Freeride Qualifying will begin on Friday September 5th. Saturday Sept 7th will feature Moto Surf race practice sessions for those wanting to test their ability in the swells before the competition. Freeride Competition and Motosurf Racing will take place on both Saturday and Sunday Sept 6th and 7th. Check the Blowsion Surfslam schedule page for up to the minute updates and schedule changes.

K&S Kuwait is proudly presenting the fourth annual K&S BIG AIR SHOWDOWN on Saturday Sept 6th with a $500.00 cash award to the watercraft competitor exhibiting the most amplitude in this must-see contest of aerial throw downs.

Rounding out the amenities of this action packed weekend is a vendor and sponsor beach display and vendor area with local food, beverage and brewery offerings to add to the family friendly festival surf environment. With over three+ miles of open beach to launch from, be sure to bring your family dog, beach blankets, wetsuits, paddle boards and wave shredding watercraft to carve up some of the famous Oregon West Coast Surf.