Eric Francis retains No. 1 spot as US racers fill the top five places

P1 AquaX, the international personal watercraft promoter, today announced its latest world rankings at its USA Annual Awards ceremony at Daytona Beach and there will be cause for celebration amongst the American riders who fill the top five places.

Launched in 2014, the World Rankings identify the most consistent and talented P1 AquaX riders in the world and are revealed every three months. They are calculated using two years’ of race results, with the focus on the more recent results which highlight those racers who are in form, and other key factors that impact on the allocation of ranking points include the number of competitors, the water conditions, the level of race class and of the riders taking part.

Having been crowned national champion at the final event of the USA series in Fort Lauderdale last month, Eric Francis holds on to the No. 1 vest ahead of his biggest rivals, Brian Baldwin and Chris MaClugage. Four nationalities feature in the list of top 10 riders – 5 Americans and a Canadian, a Frenchman and a lone UK racer – reflecting the growth of P1 AquaX racing around the world: 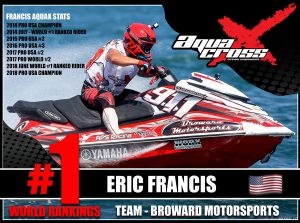 Veteran American rider Eric Lagopoulos enters the top 10, with Englishman Joe Harvey dropping one place to eighth on his return to racing this season after a serious injury last year. Rising 3 places to sixth and flying the flag for France is Thomas Favolini, the newly-crowned AquaX Pro Enduro EuroTour champion. Sophie Francis is the highest ranked female rider, having climbed 7 places to the number 18 spot in her first season of pro racing. The biggest climber in the top 50 rankings is Christian Daly. Named ‘Rookie of the Year’, he sits in 13th after rising more than 40 places. 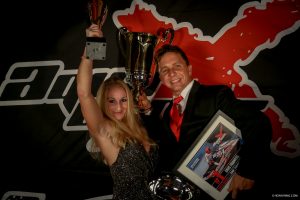 Global Head of P1 AquaX, Lisa Barsby said: “With over 250 AquaX riders having appeared in the World Rankings over the past 5 years, they have become a major talking point in the sport. Eric is no stranger to heading up the rankings and P1 AquaX is delighted to have attracted so many world class racers to our series. The next announcement will be our 2019 international race calendar which will see us race on three continents.”

Other highlights in the end-of-year round-up include: