Jet Ski Association of Serbia as an Affiliate Member of  International Jet Sports Boating Association (IJSBA) – the world governing body for PWC racing, has been sanctioned by IJSBA and approved by Serbian Government – Ministry of youth and sports, to host the Balkan Jet Ski Championship for 2014. Beside this, we will host the Para Jet Ski Championship (race for disabled people), Cesare Vismara Memorial and first race of the National Championship.

During the very bad situation in our and neighbor countries – catastrophic floods that have hit our region last month, this year Balkans Jet Ski Championship will be a little different than last few years. Actually, whole event will have humanitarian character with the accentuation to help flood victims. According that, we were deciding that we will not charge entries, but we will allow all racers to donate amount according their possibilities, for humanitarian aid for flood victims in Serbia. Also, at the race location we will make a special point for collecting the food, clothes, medical supplies, toiletries, bed linen, etc. Also, we will not forget the youngest – kids ages 10-18, who was stay without their homes and who are now at the reception centers, will have chance to ride jet ski with the professionals!

The fourth Balkan Jet Ski Championship will have open character and all jet ski racers of good will are invited, no matter in which country they live, to compete and help flood victims at the same time.

Competitions will be held in Serbia, Belgrade, at the Sava river – Belgrade Fair shore in July 5-6th. We would like to thanks all those who already confirm their presence, especially teams from Turkey, Ukraine, Hungary, Italy, Montenegro, Bosnia and Herzegovina, Croatia, Slovenia, Greece, Romania and also to invite all interested competitors to take a part. Also, we would like to send a special invitation to all Flyboarders to come and make their show.

As a part of the weekend spectacles, we will have cooking competition and participants will have chance to enjoy fish and venison food (soup, stew, grill).

Competition will be held thanks to the support of Serbian Ministry of youth and sport. 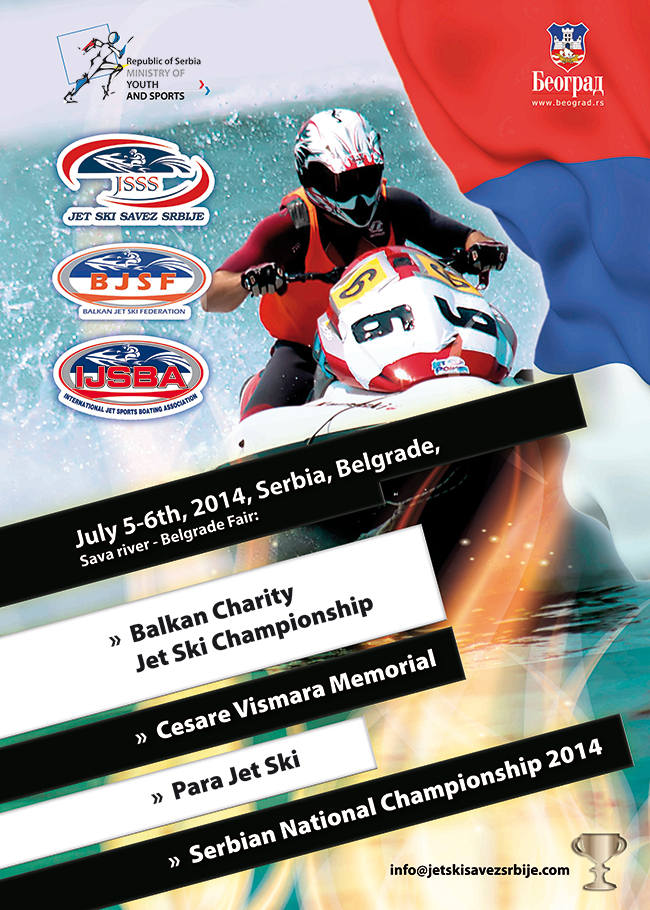