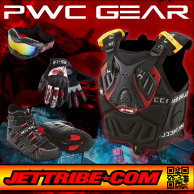 IJSBA is proud to announce that Jettribe has signed on as the title sponsor of the 2014 IJSBA World Finals. The 2014 Jettribe World Finals will take place at Crazy Horse Resort and Campgrounds, in Lake Havasu City, Arizona, USA, beginning October 4th and ending October 12th.

Jettribe is a veteran player in the personal watercraft industry. Over the last couple of years, Jettribe has risen to the top and is well recognized as the leader in producing the most comprehensive line of personal watercraft lifestyle products. Jettribe produces the most notable lines of goods from covers to wetsuits, clothes, gear bags, and everything in between. Jettribe has distributors in 28 countries around the world.

Perhaps one of the most impressive component of Jettribe’s recent growth is that they have upped their support of events and racing at every step along the way. In addition to World Finals, they have also provided title sponsorship for the following: Jettribe Pro Hydro Cross Tour, Jettribe West Coast Series, and Jettribe Europe Tour. Jettribe has also been the associate sponsor for at least four other events or series. Jettribe is also top tier sponsor of 16 competitors worldwide. Jettribe attended 19 events in 2013 and plan to double the overseas events in 2014- they have two dedicated racing support rigs sent to competitions all over North America.

Jettribe offered this statement on the title sponsorship of the World Finals: "The IJSBA World Finals has always been a big part of our life for over 15 years. Jettribe's humble beginning with World Finals began with a 10x10 foot booth at the Nautical Inn in the parking lot. Now fast-forward to 2014, we are truly grateful to have the opportunity to be the Title Sponsor the Jettribe 2014 IJSBA 33rd World Finals at Lake Havasu, Az.  To follow the footsteps and traditions of great title sponsors: Hot Products , quakeysense , McGraw Insurance, Dos Equis, Skat Trak, and Budweiser, is an honor."

It is also an honor for IJSBA to receive this type of support from a company like Jettribe.  When we have been an integral part in the growth of a rider support company, IJSBA knows we have continued to move the sport in a direction of positive growth.