IJSBA has received the following update from Bombardier Recreational Products, the makers of Sea-Doo Watercraft.  While this article is not about a PWC, it is about PWC technology.  More so, BRP's sponsorship of NASCAR events brings the attention of millions of race fans to the production of personal watercraft and remind them that our sport is among the most exciting and innovative in the motorsports industry.  We hope you enjoy BRP's creation of a Turbo Spyder: 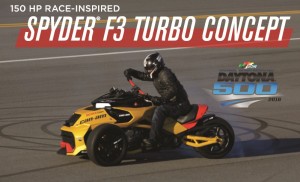 With BRP’s new Can-Am NASCAR sponsorship in mind, the company set out to create a oneof-a-kind, race-inspired turbocharged Can-Am Spyder concept vehicle. At the ground level, the idea was to leverage cutting-edge Rotax technology found in high-performance engines such as the Can-Am Maverick TURBO and the 300-horsepower Sea-Doo RXP-X, and apply it to the Can-Am Spyder.

At first, BRP challenged its counterparts at Rotax – a subsidiary of BRP – to develop a turbo version of the acclaimed Rotax 1330 Can-Am Spyder F3 engine. From there, BRP took the power plant in-house and fine-tuned it to unleash its potential.

The result is a turbocharged and intercooled Rotax 1330cc engine that generates 150hp and takes this concept vehicle from 0-60 in 4.3 seconds and does a quarter-mile in 12.3 seconds.

To add to the thrilling acceleration, the Can-Am Spyder concept vehicle also features a SPORT mode that allows for controlled rear tire drifts. Both the turbo and the SPORT mode are firsts for Can-Am Spyder, which together provide a combination that increases the fun factor of the ride.

From a design perspective, there are multiple elements that showcase this vehicle’s racing inspiration. Highlights include racing slicks, a specially-designed Akropivic 3-to-3 straight pipe exhaust, FOX high-performance shocks, an oversized hood and air intake, a NASCAR-inspired front spoiler and a Circuit Yellow paint scheme with race graphics.

This concept vehicle showcases BRP commitment to innovation and cutting-edge technology. As a first-year NASCAR sponsor, it is also a great way to inject BRP rich, performance-driven heritage into race culture. The concept vehicle will be on display with other Can-Am products at NASCAR races throughout the season.

“It’s a privilege to welcome BRP to the Daytona International Speedway family with its Can-Am brand,” said Joie Chitwood III, Daytona International Speedway President. “Can-Am is a great brand to have here with us to kick off the NASCAR season and Daytona even helped inspire a concept vehicle which we unveiled here today for all our fans to see.”
This vehicle, powered by a Rotax 1330 cc turbocharged and intercooled engine, goes from 0-60 mph (0-100 km/h) in 4.3 seconds and does a quarter-mile (0.4 km) in 12.3 seconds. It also  features SPORT mode that allows for controlled rear tire drifts. With this concept – which is not planned for production – BRP’s Can-Am brand brings its excitement, performance and innovative technology to NASCAR fans.
“BRP’s Rotax engineers challenged themselves to develop a turbo version of the Can-Am Spyder F3 engine, which resulted in this high-performance vehicle. Our team then fine-tuned everything to unleash its potential,” said Rénald Plante, director, Can-Am Spyder engineering. “This concept showcases the advantages of a Y-frame design, such as a lower center of gravity, the ability to drift and superb tire grip during aggressive cornering.”
“As a first-year sponsor in NASCAR, BRP is injecting its rich heritage of powersports design and innovation into race culture,” said Anne Bélec, senior vice-president, Global Brand, PAC and Information Systems. “This sponsorship is a great opportunity for us to share our line-up of CanAm on- and off-road models with NASCAR fans, whose values of excellence echo ours.”

The Can-Am brand is the entitlement sponsor of the Can-Am Duel At Daytona, as well as the  Can-Am 500 in Phoenix in November. Additionally, in association with Kappa Clothing and Cyclops Gear Cameras, BRP is a primary sponsor of the #32 GoFAS NASCAR Sprint Cup Series racing team featuring drivers Jeffrey Earnhardt and Bobby Labonte, as well as  Alex Labbé in the NASCAR Pinty’s Series in Canada.

BRP will display its full line of innovation-driven Can-Am products, including the turbocharged Can-Am Spyder concept, as well as Can-Am ATVs, side-by-side vehicles and Can-Am Spyder roadsters at track Midway areas throughout the season, including Daytona International Speedway. Area BRP dealers will also host events where fans can see the latest models.

About BRP BRP (TSX:DOO) is a global leader in the design, development, manufacturing, distribution and marketing of powersports vehicles and propulsion systems. Its portfolio includes Ski-Doo and Lynx snowmobiles, Sea-Doo watercraft, Can-Am all-terrain and side-by-side vehicles, Can-Am Spyder roadsters, Evinrude and Rotax marine propulsion systems as well as Rotax engines for karts, motorcycles and recreational aircraft. BRP supports its line of products with a dedicated parts, accessories and clothing business. With annual sales of over CA$3.5 billion from 107 countries, the Company employs approximately 7,600 people worldwide.
Ski-Doo, Lynx, Sea-Doo, Evinrude, Rotax, Can-Am, Spyder and the BRP logo are trademarks of Bombardier Recreational Products Inc. or its affiliates. All other trademarks are the property of their respective owners.

Daytona International Speedway is the home of "The Great American Race" - the DAYTONA 500. Though the season-opening NASCAR Sprint Cup event garners most of the attention - as well as the largest audience in motorsports - the approximately 500-acre motorsports complex boasts the most diverse schedule of racing on the globe, thus earning it the title of "World Center of Racing." In addition to eight major weekends of racing activity, the Speedway will host the inaugural Country 500 – The Great American Music Fest at DAYTONA over Memorial Day Weekend in 2016. Rarely a week goes by that the cSpeedway grounds are not used for events that include civic and social gatherings, car shows, photo shoots, production vehicle testing and police motorcycle training.