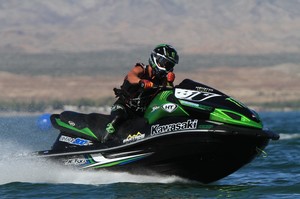 The final round of this season's IJSBA sanctioned P1 AquaX USA championship has still to be run, but some riders are already turning their thoughts to the 2014 race series. Eric Francis at Team Kawasaki is one of those and, in partnership with Torx Racing, he has announced that young UK racer Anya Colley will be joining the team for next year's AquaX USA series.

A multiple world and national champion, Francis is already a fan of the P1 series that was only launched in the USA in June: "In my eyes, AquaX is the next big thing in personal water craft racing. My goal is to excel in everything I do and I'm planning to pick up the AquaX challenge in 2014. Team Kawasaki wants to sign up the best and Anya Colley is the logical choice."

21-year-old Colley from Nottinghamshire, England will compete at St. Cloud next month as the P1 AquaX championship reaches its climax to get her dialled in to her new Team Kawasaki Torx Racing Ultra 300x that she will be racing in Florida next season. Colley has become a major force in close course racing, winning 7 world titles on a stand up jet ski. This season she competed in the UK series where, despite being dogged with mechanical problems, she showed that her champion spirit and determination make her a threat in any type of racing. 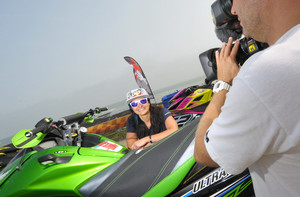 An excited Colley said: "I'm so happy to be joining Eric Francis and Team Kawasaki. He has helped me enormously and I can't thank him enough for giving me this amazing opportunity. I can't wait to hit the track at St. Cloud for a taste of what the AquaX USA scene is like.  My fitness regime includes circuit training, aerobics, spinning, cycling and swimming, and I will be training hard throughout the winter to do Team Kawasaki and all my sponsors proud next year."

P1 championship manager Azam Rangoonwala is delighted at the announcement: "This is great news for AquaX USA. The series has made a huge impact in just a few months and the partnership of Francis, Colley and the race-proven Kawasaki Ultra 300x will add even more spice to our 2014 menu. We are looking forward to welcoming Anya to St. Cloud for our final race weekend of the season on 16-17 November."