The final round of the IJSBA sanctioned P1 AquaX USA race series attracted 38 riders to the start-line in what has become the fastest growing watercraft championship.

In the 300 class Eric Lagopoulos had been the firm favorite to take the title abroad his Sea-Doo RXPX after he devastated the competition at the first round battling the 8-foot surf at the famous Daytona Beach. Kevin Wassum and Jeff Thornton would finish second and third respectively. By rounds two and three the entries had swelled to over 25, Lagopoulos would suffer mechanical problems and new challengers in the form of Jeremy Schandelmayer and Cody Hawkins would take the top points. 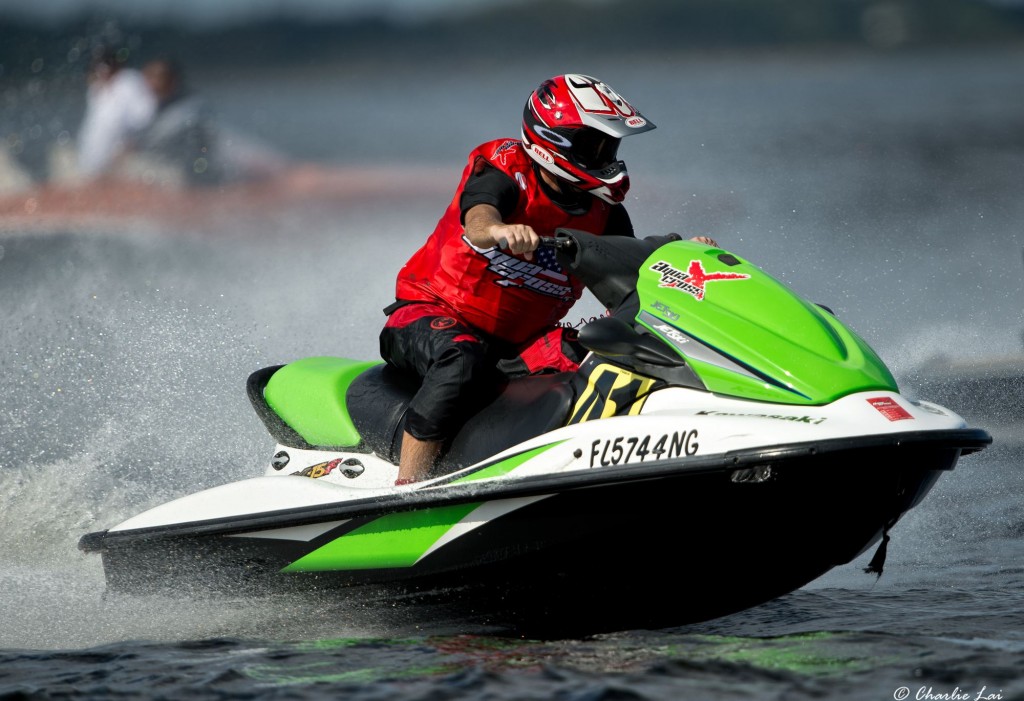 Going into the final round, only 23 points separated the top scorers. Jeff Thornton's Kawasaki 300x was topping the leader board. The Sea-Doo RXPX 260 of Kevin Wassum's a close second and Lagopoulos and Schandelmayer trailing in third and fourth. But with 18 new racers on the line all with nothing to lose, drop scores and double points adding to the mix, consistency would be the name of the game.

After the Superpole race on Saturday Schandelmayer gained 8 points over Lagopoulos and closed the gap on Wassum. Jeff Thornton threw his chances of lifting the title by not scoring. A missed buoy in Race 1 left Schandelmayer with one-minute time penalty and losing valuable points to his rivals. 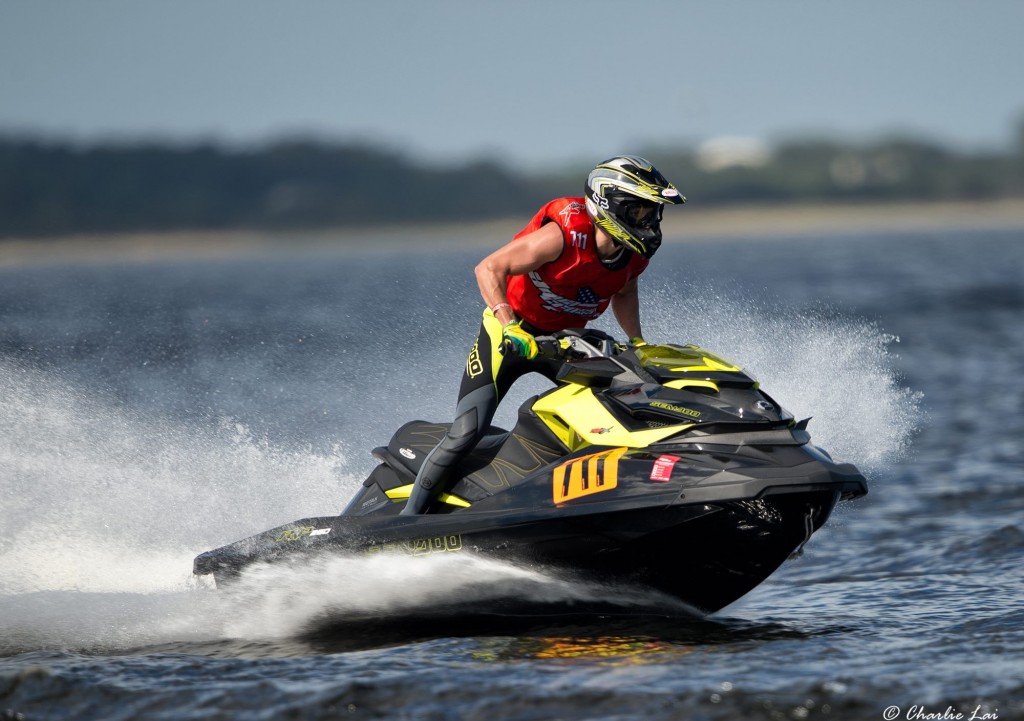 Lagopoulos fared no better hemorrhaging much-needed points as he struggled to find the pace of earlier rounds.

By the time the flag dropped on race two, it was all Kevin Wassum's to lose.

Schandelmayer again lead the championship contenders finishing 7th in the pack. Wassum came in 8th with Lagopoulos in 10th. Wassum had done it! He'd done enough to lift the first ever AquaX USA 300 title with consistent racing and smart riding. This is a great achievement for a young man in just his first year of watercraft competition.

"I came into the final round knowing that the points were close and the season title was still up for grabs. Battling back and forth with Schandlemayer and Lagopolous all season long was a lot of fun. These are guys who are great racers and have been well known in the watercraft racing world for years, so to be competing with them for a title was pretty awesome, and at times a bit intimidating." said Wassum. 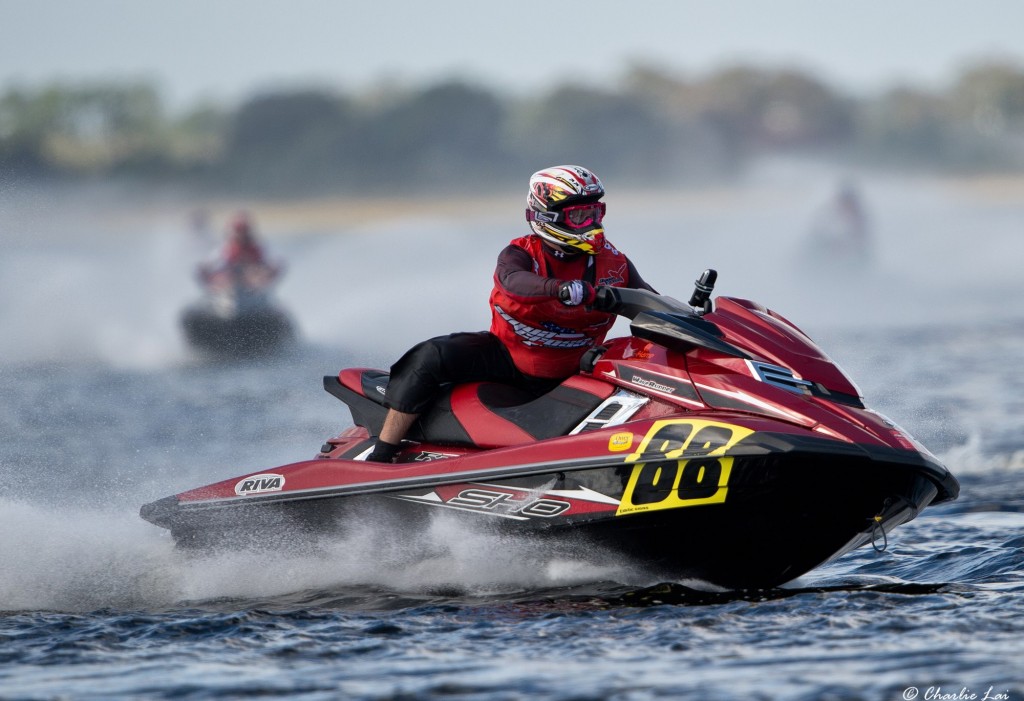 "Racing in St Cloud with 38 watercraft on the line added an interesting dynamic to things; but when the flag dropped and the jet spray started to fly, I tried not to worry about my overall position and just keep focused on what was in front of me."

"I'm very proud to have won the title for AquaX USA's inaugural season. The AquaX staff have been absolutely phenomenal all season long, the races were a blast, and the competition was totally fierce! I think this race series is the start of something much bigger than any of us first realized when we hit the water in Daytona. To be a part of it and to be able to win the 300 class's first season championship, it's really a special thing. I'd like to thank everyone involved for an amazing season, I'm already looking forward to the first race in 2014" said a delighted Wassum.

In the 250 championship Ron Levy had assumed the leading position aboard his Yamaha FX SHO from the first round in Daytona. Tim Mckercher took the win in Pahokee, but Levy was back at Round 3 to take maximum points. Going into the final round Levy didn't have to win to take the title but needed to finish within striking distance of his rivals Tim Mckercher, Sean Hagen and Greg Broche.

However, Tim Mckercher did need to win if he was to improve his overall chances at the title, but a 1 minute time penalty given for a jumped start in the Superpole put pay to that. Greg Broche inherited the win, but a severe bout of arm pump in Race 1 left Broche down in 4th. By Race 2 all Levy had to do was finish and the inaugural 250 AquaX USA title would be his. However, Broche, Mckercher and Hagen were still in the fight for the final two podium positions.

Levy finished 3rd picking up the title and also for his efforts lifted the 'Rookie of the Year' award presented by Pro rider Magazine. Broche won the race and in doing so secured second spot on the podium for his Yamaha FX SHO, with Mckercher's Sea-Doo GTR just edging out Sean Hagen for 3rd in class.

"I had a great season with AquaX and am glad to have been given the chance to start racing. I've learned a lot this season and overcome many challenges in this stock ski off shore racing series. It was a great beginning to my racing career. I know AquaX will become a huge success and I hope to continue racing with them next year. To be awarded Rookie of the Year was a huge surprise!" said an excited Levy

Despite mechanical gremlins scuppering his final round Kelly Belval dominated the 200 class aboard his Kawasaki STX 15F, picking up the title ahead of final round winner Scott Reeves and Jason Maxson. "I've had a great time and I'll be back next year on a Yamaha VXR" said Belval

A total of 48 racers competed in AquaX USA this year including Cup participants. Championship Manager Lisa Barsby commented "I am very excited at the way AquaX has taken off in the USA, the final was a nail biting but awesome event to have 38 riders on the grid and I am delighted that so many pro-racers have got involved. Next year looks set to be very interesting indeed!"

P1 will be announcing the 2014 AquaX USA race calendar next month.