IJSBA is very happy to put the spotlight on 2016 Hall of Fame inductee, Fumikazu Watanabe.  Fumikazu is more recognized by the "Bun" and has been a dominant force in the world's Freestyle scene for more than a decade.  Below is a biographer shared with us by his friends at home who will be joining us Saturday, October 9, at the Hall of Fame induction ceremony which is held at the London Bridge Resort's Convention Center approximately 30 minutes after the conclusion of the Blowsion Under The Bridge Night Show.

In 1988, at the age of 20, Bun began is first efforts in the sport of Freestyle.  He started on Kawasaki 550 and was able to accomplish floating tricks and submarines. By 1998, he was able to perform an aerial barrel roll and began attending competitions at the Japanese Jet Sport Federation (JJSF) events.

Two years after, he is made his first entry to compete in the IJSBA World Finals. Inspired at this event, he intended to develop his own freestyle hill and established a new company BUN Freestyle.

Bun had no mechanic or crew doing all of his work on his own.  His perseverance paid off and, in 2007, at the IJSBA World Finals, finally he won the world title by his own made hull, engine, complete freestyle boat.

By 2011 competitors trained by BUN and using BUN equipment began to win World Finals on their own as well as taking major wins in Japan and around the World.  Mr. Watanabe looks forward to participating in the next generation of Freestyle. 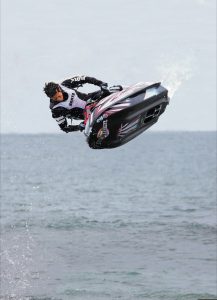