Greetings from El Salvadore airport returning from the opening round of the 2016 Peruvian competition season.  The heart of racing season is approaching fast, we hope you are already hitting the gym and getting your watercraft ready.  We realize that snowboarding is still going on, at least in the West (thank you El Nino), but the rubber band will be stretched across the front of your PWC soon enough, you don't want to be unprepared.  Please share the following news with your friends and colleagues in the PWC Racing family.

This update begins with the wonderful news that IJSBA has secured Crazy Horse Campgrounds and Resort, in Lake Havasu City, Arizona, as the location of the 2016 quakysense World Finals.  We have been working close with the owners of the park to ensure the mutual interests of the event and the venue are met.  IJSBA values the relationship we have with our long time hosts and we intend to carry a partnership into the future ground lease renewal between Crazy Horse and Arizona State Lands.  We look forward to sharing this wonderful environment for our 35th anniversary quakysense World Finals.  Everyone is expected to attend this October 1-9 for some great competitions supplemented by some very special celebrations. 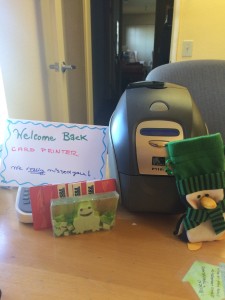 IJSBA welcomes back the membership card printing machine.  It has been a lonely several weeks while this thing was repaired.  Well, it wasn’t that lonely- we were kept company by several frustrated people calling in wanting to know the status of their card.  We do apologize for this problem that was out of our hands, it was sent back to us once without being properly repaired and your Managing Director called the manufacturer with an irate tone equivalent to the totality of all the calls we received.  Surprisingly, we got the printer back, in working condition in just a couple of days after this exchange.  Ok, this was a digression that wasn’t necessary.  All backlogged cards have now been mailed and you all can eagerly show off your cards to impress people on first dates and to avoid waiting for tables at high end restaurants.  Use your expired cards to open locked closets when you have lost the key or to stick in your BMX bicycle spokes so it sounds like a motorcycle when you ride it (shame on you 80’s era PWC people for what you are thinking right now).

IJSBA will be on odd operating hours until March 21st.  Ria, the office manager is off on leave- get well soon Ria; while we are doing shout outs: Happy Birthday, today, Peter DeSmet and happy work anniversary to a couple of you that are on my LinkedIn.  Anyway, the office will be unstaffed while we are in China for a competition event.  Don’t worry, though, voicemails are immediately forwarded to the IJSBA email and, emails, well they arrive the same in China.  We will still offer same day replies and callbacks, just be aware that we will not be in the normal Pacific Standard Time Zone.  Need your membership number while we are away?  No problem, we are bringing the stuff to process them with us!  But, the cards wont print until March 21st.  Oh, one more shout out: while finalizing this update at the airport bar coffee shop, we got a telephone call from Dave Arnold (who noted that there was an expensive sounding international ring tone when he called but carried on with the call instead of hanging up). He is in good spirits and expects to be fully recovered from his illness within a month or so.  We cannot wait to have you back on the tower, Dave, you are very much missed.

What do IJSBA staff, iPhone assembly workers, and Jettribe racers like James Bushell, Brock Austin, Jeremy Shandelmeyer, Christian D’Agustin, Phil Pope, and Areo and Aqsa Aswar all have in common?  We will all be in Shenzen, China, March 9-13, for the 2016 Motorboat Open competition.  Held in the Dameisha Marine Center, this event is expected to be one of the most well produced events in the Asian regions this year.  Expect quite a bit of updates when we arrive.  We are even bringing World Finals and IJSBA tribute events announcer, Mike Young to provide the English coverage of the event.  IJSBA Tech Director, Mike Rodgers, will be handling rules compliance.  Please start watching IJSBA.com for updates in just a couple of days.

IJSBA attended the second annual gathering of the IJSBA South Amercian Confederation which is expected to evolve into the first functioning regional IJSBA Field Office.  Plans were made to bring formal recognition to Raid type competitions as a more integral cog of the IJSBA Championship hierarchy and plans were laid for a cooperative effort to host a large scale event amongst the participating South American IJSBA Affiliates.  In attendance were representatives from Argentina, Colombia, Uruguay, Paraguay, Peru, and Brazil (by proxy).  Panama and Venezuela are preparing entry into the system as we speak.  The upcoming events in Belize will caucus with South America while the new representation in Mexico is finalized.  Upon the opening of the field office, larger international events are expected to begin, this year.  This development has direct government support from several participating Affiliates and is expected to triple the size of the South American Racing Community within one year.  The formal announcement of the IJSBA South American Field Office should be announced by the next update.

We expect to do our first mail blast of the year in just a couple of days to mark crossing the of 200 Days Until The 2016 quakysense World Finals.  Here are some highlights for what is being planned, so far:

-           To date we have 32 returning vendors and 4 new vendors in the trade show portion of the event.  We plan to do special historical highlights to the legacy vendors and performance producers.

-          The Vintage Ski Museum will, again, return as a centerpiece of World Finals.  IJSBA has pitched the idea, to the museum organizers, of making a historical timeline display of the beginning of the sport to now.  We will let you know how that goes.

-          This is a Hall of Fame year.  We have received nominations already and would like to hear more from you before we start the telephone call tree to discuss them with the folks who usually weight in on these decisions.  If you have a nomination, please send us a well written email to info@www.ijsba.com.  Yes, you can nominate yourself, and many people do every year, but, it is kind of tacky to do that.  Make a fake Gmail account and do it instead.

-          We will be repeating last year’s pit placement plan with some refinement.  We also expect to have access to the Mesa for additional parking (keep your fingers crossed).  Please start these discussions early if you have questions or concerns about pitting at World Finals.

-          The Under The Bridge Night Show is expected to return.  Product exhibitions and maybe, just maybe, the ramp jump may return.

-          The Aqualife Festival is expected to double in size and a greater reach of water recreation oriented exhibitors to have some very cool new products.

To participate in the World Finals, you must be eligible.  Eligibility requires participation in, at least, two IJSBA Sanctioned events in 2016.  If you are a first time competitor, you must participate in at least two IJSBA Sanctioned Closed Course events.  Blake Corning is returning to event promoting and will be organizing these exact type of competitions that you need to be eligible for World Finals.   Blake really loves PWC racing and, on top of it, he really KNOWS PWC racing.  Blake has been sending in all kinds of amazing things he is building to promote his races including backlit signs and trophies.  It seems like not a day goes by that Blake does not text a picture of something new he is working on [Managing Director’s note: since I know he wont be submitting receipts for World Finals reimbursements, I am happily looking at those texts and discussing them with him].  His first returning event is April 15-16 in Elma Washington.  If you missed the news, because you don’t check IJSBA.com often enough and don’t have the attention span to click past the first page of news, we have you covered; please see the news about Blake’s event here:  http://www.ijsba.com/2016/02/19/blake-cornings-water-x-april-16-17-elma-washington/

IJSBA is growing.  We have now more affiliate offices and work responsibilities than we have in the last 15 years.  Research, policy review, and quality control duties are taking more and more staff hours daily.  IJSBA will be looking to hire some part time staffing positions including: assistant competition manager, data entry, and general communication.  Positions will be filled by remote staff but perspective inquiries must be close enough to IJSBA offices in the San Francisco Bay Area to attend monthly meetings.  Persons in the Lake Havasu City area are encouraged to inquire as a Havasu office is expected to open, on a seasonal basis, prior to World Finals.  If you are interested, please send a cover letter and resume, by email, to info@www.ijsba.com.

Kawasaki has released a very cool new 125cc motorcycle called the Z125.  This unit is a larger displacement unit resembling the very popular KSR110 which, rumor had it, many people reputedly snuck out of Asia to use as a minibike here in the states.  Those that did probably wished they knew this was coming as this is a beautiful piece of small machinery.  View this new product here:  https://www.kawasaki.com/Products/2017-Z125-PRO?cm_sp=NPL-_-KMCPromo-_-HomePagePromo.  We expect to see many of these buzzing the pits at World Finals (better call Havasu Powersports now)- remember to wear helmets.

That’s it for the Pre-Spring update.  Please send any questions or comments to: info@www.ijsba.com.