Hello PWC Racing enthusiasts.  IJSBA is working overtime getting ready to start the first Pre-World Finals work day on Monday.  Today is 70 days to the big event and we just wanted to give a short update and let you know some things going on around here.  As always, please share the following news with your friends and colleagues in the racing family.

IJSBA will be introducing the draft of some modifications for the 2017 Competition Rule Book sometime by the end of the month.  We will also import some of the final 2015 components to get ready for the interactive rule book download which should be available at World Finals.  Key changes will be the reintroduction of a couple of Ski Classes an some modifications that will make it clear where the sport will be organized for the next 5 years.

I know a lot of you have some rules you would like modified before World Finals but this isn't going to happen.  Larger displacements and letting you remove that ribbon from the intake- these aren't going to happen and if anyone is telling you this is going to be something we spring on you just before the event they are giving you incorrect information.  Please send us any inquiries you have now because we plan to very firm on the published rules.

We have no plans for major rule revisions in 2017.  We will have a major rules congress in 2017, at World Finals. for the 2018 Rule Book but the changes made for 2016 were intended to be for a two year run.  New products, which do not naturally fit in the existing structure, will dictate the bulk of attention to the rules.

IJSBA has been very pleased to welcome record numbers of new members in 2016.  Many organizers have reported a lot of new faces at events and, across the board, the turnout at IJSBA Sanctioned events has noticeably increased from 2015.  US Election years usually show downturns and economic activity and the PWC industry as had some cooling effects from the shift in exchange rates but IJSBA Racing seems to be defying this trend.  We expect a nice turnout at World Finals and are sure that some of the announcements that will start rolling in over the next couple of weeks will further motivate attendees who are sitting on the fence.  IJSBA has also enjoyed a 5% increase in International Affiliate participation since this time last year.  We believe the nation count at World Finals will be higher than last year.

As mentioned above, attendance at races has increased and more venues from around the globe are requesting IJSBA Sanctioned competitions as high profile events.  Here some highlights from 2016 and from what is to come:

The event, in Martinique, was stunning this year.  The venues, around the island, were as stunning as they were challenging.  Peter DeSmet and the national hosts created a program that instantly had all participants counting down the days until the 2017 return.  This event also started IJSBA's new emphasis on increasing the focus on racing in the Caribbean.  Major announcements will be in released before World Finals with many of these announcements being followed up with displays in the World Finals vendor area.

The first order of business in IJSBA's goals of growing the Caribbean region produced an amazing new partnership: Karujet.  This challenging event has been a major staple for the Offshore Racing segment of the PWC Racing world.  Together with the organizers, IJSBA will bring some new ideas to this event which will be shown at the 2016 quakysense World Finals.  IJSBA is excited to bring Karujet's experiences and methods to our collective evolution.

P1 Aqua X has been one of the most talked about new offerings in all of PWC Racing.  P1 has brought a lot to the IJSBA family with their very high production values and new takes on focusing on PWC as offered by the manufacturers.  P1 Aqua X is the producer of the IJSBA US National Championships and we are certain that their event in Chicago, this September 10-11 will set new standards in both production and publicity.  Being set in the biggest city in one of the hottest PWC markets, and in the center of the USA, will only add to what is sure to be spectacular.

Blowsion Surf Slam and Under The Bridge Night Show

Blowsion sets the standard when it comes innovation and some of the most amazing paint schemes to ever been seen on a PWC or a race helmet.  Blowsion will produce their annual Surf Slam and US  Freeride Championship September 9-11 in Pacific City Oregon.  Blowsion has also bring us, again, the night time freestyle show under the London Bridge, on October 8, during World Finals.  We are very grateful to count on their participation and partnership for another year.

In the final shout out for this mini update, we want to give a very big welcome to DJSA, an organizer in Northern California, who is organzing their first standalone IJSBA Sanctioned event this weekend at Camp Far West (DJSA copromoted a Norcal event last year with RPM).   We are very excited to grow together.  Anyone attending this event will get an additional special treat, a veteran racer is going to be racing Brent Flambures factory Yamaha Waveraider from the mid 1990's.  Ok, so most people under 40 don't know who Brent Flambures is, but, we assure you that this is cool, he was an awesome racer back in the day (not that he isn't awesome now- he just isn't racing anymore).  Here is a picture of it, we hope to have a story soon: 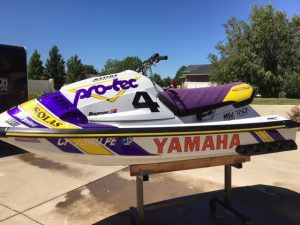 The 2016 quakysense World Finals host the world's PWC Trade show.  In addition to the first public physical showing of most 2017 models (rumor has it every OEM has new models) the aftermarket and lifestyle producers will have their premier products and some of the lowest prices of the year.  Here is a short, but far from complete, list of who will be parked underneath a tent during World Finals supporting the sport and showing you their fine merchandise:

Pork Chop On A Stick