Happy Mothers' Day to all of the mothers in the PWC Racing family. This update started going from outline to draft on the evening of May 11, which was Mothers' Day here in The States. We have a pretty cool announcement to make and thought we could make it Sunday night but we have a little more red tape to clear first. So, the announcement is probably going to come in the next update. Even though it took a week to decide to put it off, I didn't want to change the introductory section- I don't think we have ever sent out Mothers' Day wishes before so one is due- even if it is seven days from the date. Without somebody's mother, there wouldn't be and Personal Watercraft events- in fact, there wouldn't even be personal watercraft. There also wouldn't be anyone to organize events or anyone to compete in them if we didn't have moms (I know, dads are part of the equation, too, but, Fathers' Day is next month). So, we use this update's opening paragraph to salute all of the mothers who have supported us in our obsession with watercraft, cheered us on while we raced, helped us nurse our injuries, and generally made our world a better place. Some of you mom's are competitors, as well; to you, we give you a standing salute as you juggle parenting while laying your claim to the race course. Please share the following news with your friends and colleagues (and mom's) in the Personal Watercraft Racing Family.

The 2014 competition has begun. Most major tours in the world have started: The USA, Thai, Australian, and European Championships have all recently had their first rounds and we are awaiting news of second rounds. The Canadian tour is preparing to start as are some exciting new international competitions in several regions of the globe. Each year, the first round of these tours is almost always the most anticipated. Finding out who is ready to win, who isn't, who has bad luck, who got a break, and who came up with a new secret performance package of the year are all the questions for which we all anxiously await answers. Reiterer, Motzouris', Francis, Molee, Bushell, Aswar's, Dardillat, all are showing us that they all have the capabilities to take a title. Moore is preparing to show us he can retain one while Klippenstein is working to get back the one that got away. All of the old guard is bringing their "A Game," and they need to, as we have a Copenhaver that is charging for the top. Stay tuned for what will be a very exciting season around the globe.

Vintage Ski is 550cc maximum displacement at World Finals. At regional races, the standard will be 550cc unless the class designates a specific Vintage Class (i.e. Vintage 650cc).

Ski Lites is 850cc, for a two stroke powered watercraft homologated in quantities above 500, just like Ski Stock. However, reaching 850cc may only be reached by the adhering to all of the restrictions and limitations in the Stock Class section of the Rule Book.

Any four stroke powered runabout, in any class, may use all of the available OEM cylinder space to bore unless that watercraft was homologated with an original displacement above 1,500cc. If the OEM displacement is above 1500cc then the maximum additional bore is 1mm on all cylinders. In the Hydrodrag series, it is erroneously believed that a larger bore is allowed and printing this allowance was an error by the drag coordinators. Hydrodrag competitors must be aware that the correct displacement will be enforced in 2015 unless voted otherwise in this year's rule change period. Overbores larger than 1mm are not permitted for Closed Course or Endurance Racing.

Ski Limited has the same maximum displacement of 850cc for a two stroke powered watercraft homologated in quantities above 500.

This concludes the list of displacement questions sent to us in any notable frequency since the start of the year.

In March 6th, of this year, something really awesome happened. The IJSBA Affiliate of Peru hosted another wonderful South American Championship. Peru started off the event with a traditional press conference held at one of the administrative floors at Lima's Estadio Nacional, the National Stadium of Peru. During this press conference, the heads of each participating nation's IJSBA Affiliate signed a treaty that arranged for more collaborative efforts in South America. Taking cues from the success of the IJSBA European Tour, the South American IJSBA Affiliates are focused on having their own international tour as well as increasing the size and prestige of their respective individual competition programs. A few strokes of a pen gave birth to the IJSBA South American Watercraft Confederation.

The enthusiasm of South America is well timed. The regions of Southern, and Central America, have experienced substantial economic growth in the last few years. PWC Racing strongholds such as Brazil, Argentina, Bolivia, and Peru have had stellar leaps in their economies with further growth projected. Things are noticeably different in Peru since the last IJSBA field trip of three years ago. Construction has boomed with new high end buildings springing up everywhere. Newer cars now dominate the vehicles on the road, and the malls and restaurants are full of customers with cash in hand. This is the environment where more persons purchase personal watercraft and where more of those new personal watercraft owners find their way to the race course.

It is in this environment that Peruvian IJSBA Affiliate director, Anibal Aliaga, furthers his goal of a larger South American PWC contingent and strengthening Peru's success in the PWC Racing world. Aliaga arranged a two day competition in the beaches between Lima and the Asia Beach district of Peru. Asia Beach is an hour and a half, or so, from Lima. Competitors travel south and go through some desolate areas that a jaded competitor might never believe could lead to a venue suitable to host a South American Championship. However, as one travels through some of the canyons, you begin to see beautiful views of the Pacific Ocean. In fact, Asia Beach is anchored by an outdoor mall called Sur Plaza Boulevard that contains numerous high end stores ranging from electronics to fashion. Also included at this plaza were Sea-Doo and Yamaha dealerships that look like they had been plucked out of Beverly Hills. Indeed, the location of the first portion of the competition was in Naploan Beach which is a mixture of traditional Latin American tourist beaches and opulent Mediterranean style beachfront mansions all in the same cove. Similarly, this cove consisted of mega yachts, owned by Peru's elite, anchored next to masses inflatables being enjoyed by regular laborer types who were there for a day of relaxation on the beach. This cove hosted a medium sized closed course track designed to hold eight to ten runabouts on a split start gate.

The closed course portion of the South American Championship was easily the most intense of the overall event. Competitors who have made the World Finals scene, like Kiko Chia, Antionio Claros and Paloma Noceda, were joined by a variety of regular regional competitors from countries such as Brazil, Argentina, Columbia, Bolivia, and more. Kiko Chia would be the sole Peruvian to keep a closed course title- Masters' Runabout Open- in the host country as the international make up would, in fact, make the event a true South American Championship. The spotlight of the closed course racing was not on the nationality of the winning competitors, but, rather, the gender. A young female racer, from Columbia, named Andrea Dominguez, dominated the Novice Runabout Stock Class and was mobbed by reporters and spectators who immediately bestowed celebrity status upon her. Antonio Claros may have won the Pro Runabout Open category, as he did in Pro Runabout Stock, but Peru's Paloma Noceda was the stat of the event for leading the final moto of the class and holding on to the very last lap. She may as well have won the race because the same mass of bodies that had surrounded Dominguez had not yet had their fix of paying homage to the female empowerment of the event. Antonio Claros proudly took his win among cheers for Paloma. Sportsmanship and celebration of human accomplishment permeated the beach.

The endurance/offshore portion of the event was held in a resort area, closer to Asia Beach, called Bujama. The competitors did not get the literal safe harbor protections of the closed course competitors, the surf was pretty heavy. This portion of the event was separated between two disciplines- one that required navigational skills as well as a pure endurance component. Each of these classes were divided between a team category and a single rider category. In the Offshore division, Peru would keep a two more titles in the host country thanks to the navigational skills of Willy Gutierrez in the F1 class and the team of Javier Diaz and Rafael Davila in the F2 class. In the endurance portion of the event, Chile's Jonathon Perez would take home the F1 title with Bolivia's Antonio Claros splitting the team F2 title with Peru's Kiko Chia. The highlight of the event was an unidentified rider who charged a breaking wave, at full throttle, (probably trying to beat it from breaking) and launched at least 25 feet in the air. [The move was reminiscent of Chris MacClugage's airborne move at the 2003 IJSBA Motosurf Championship for those of you who saw it except the unnamed runabout competitor did not have as successful of a landing]. The flying runabout spectacle set the height bar which may or may not have been topped by the Freeride winner Jared Ajlouny (who somehow got the South American Border moved to below Canada… the same gerrymandering got an Australian in the Freeride as well).

The award ceremony was held at the poolside nightclub at Asia Beach's very posh Aquavit Hotel. Competitors celebrated, very attractive people danced to the latest club music, and people were hurled in the pool long after it shut down. The efforts of Anibal, Miguel Gonzales, the staff of the Federation Peruana De Motoacuaticas really did a great job of making this a wonderful event from start to finish and we cannot wait to see what comes next from the IJSBA South American Confederation. 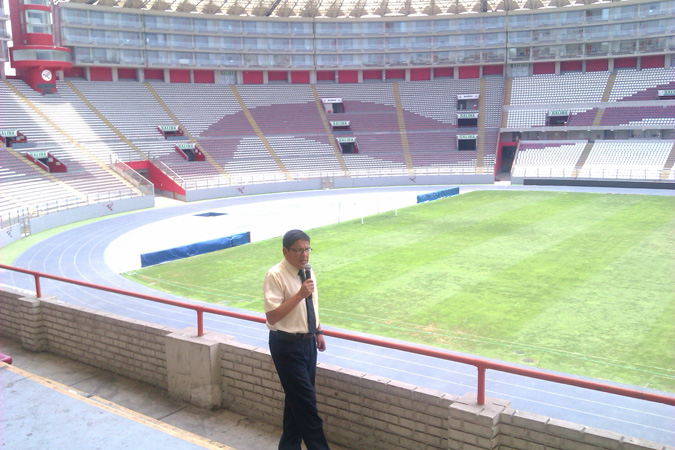 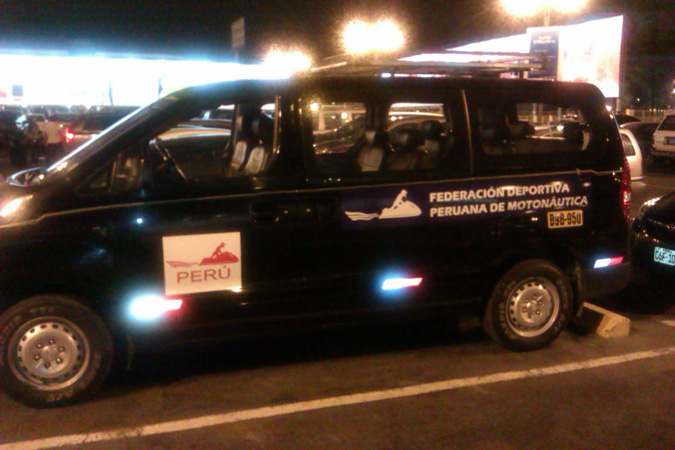 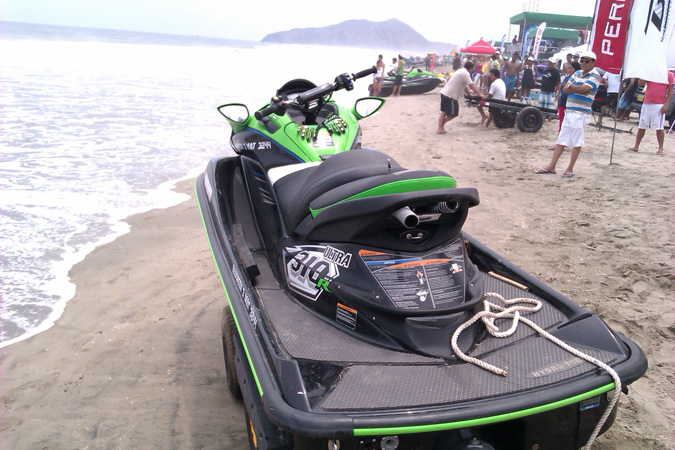 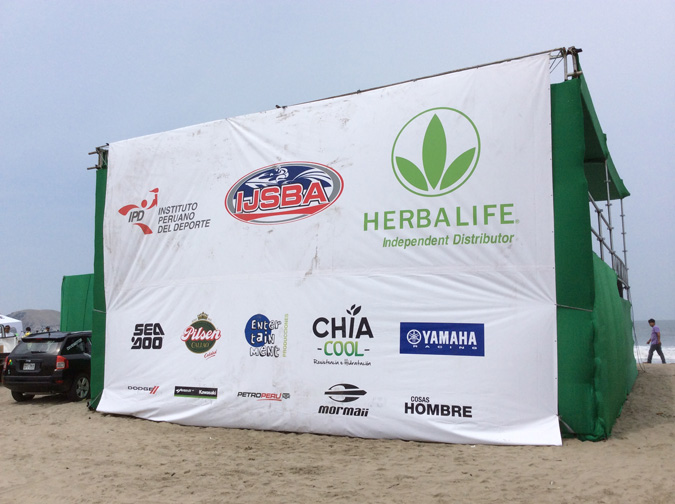 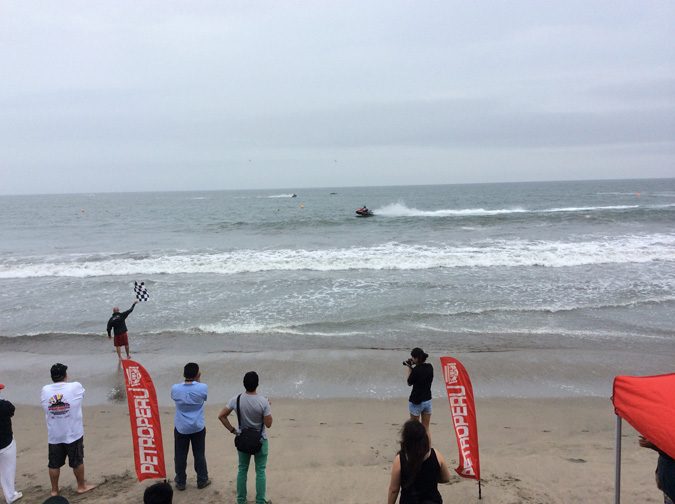 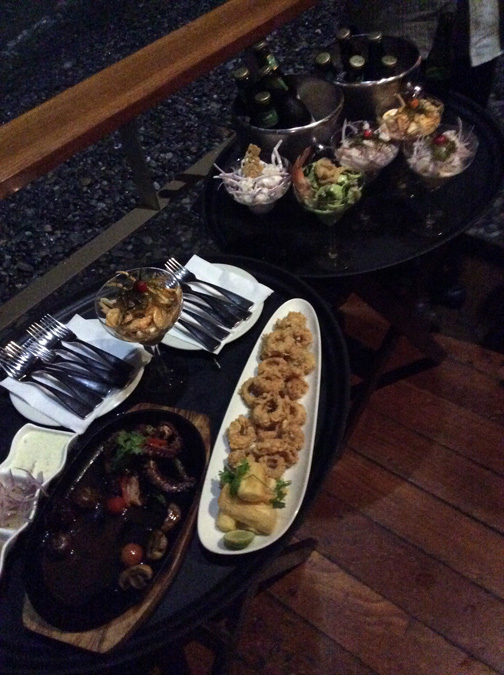 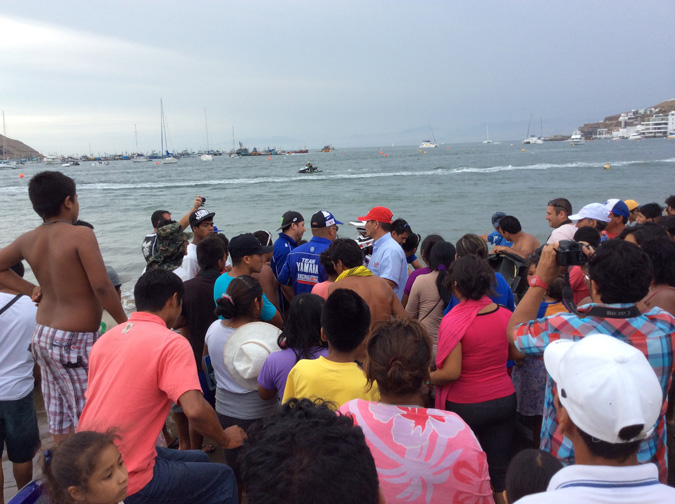 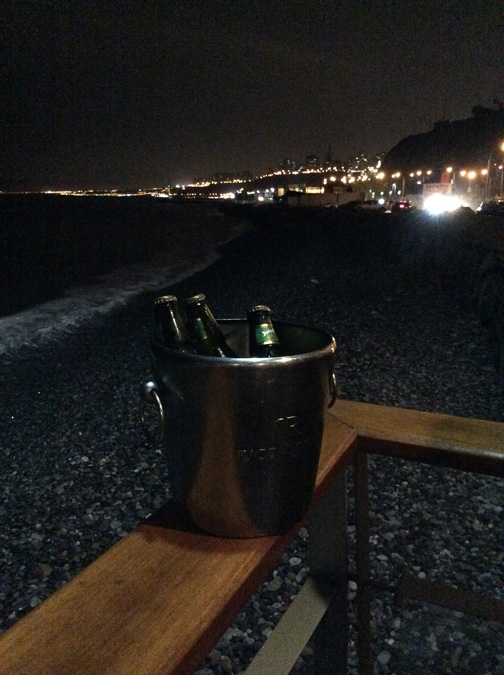 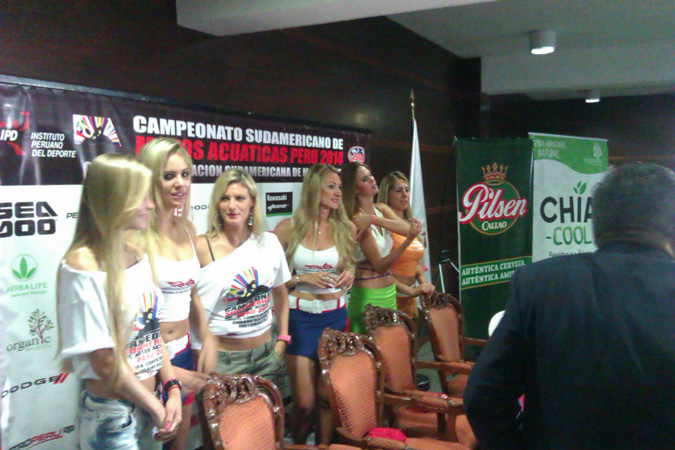 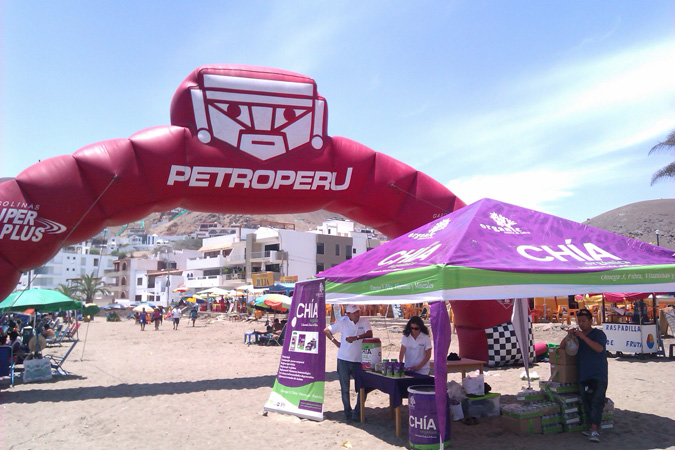 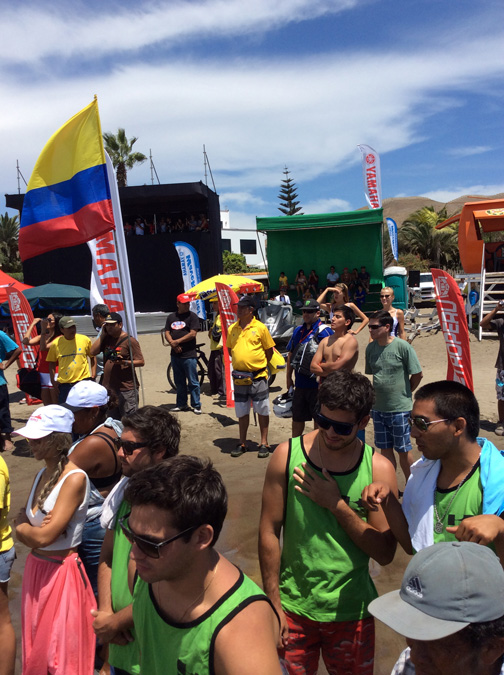 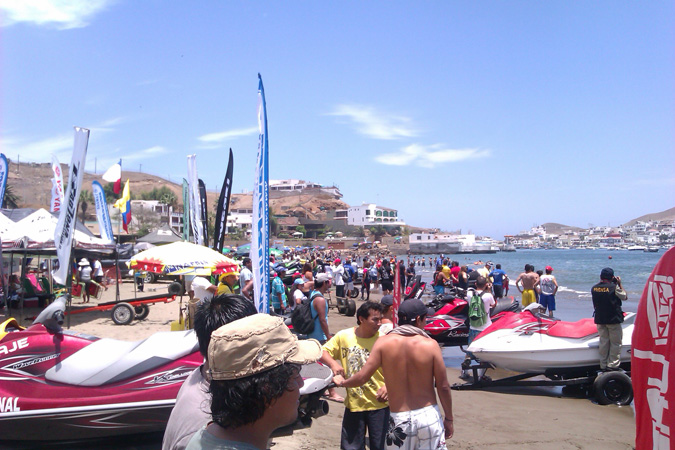 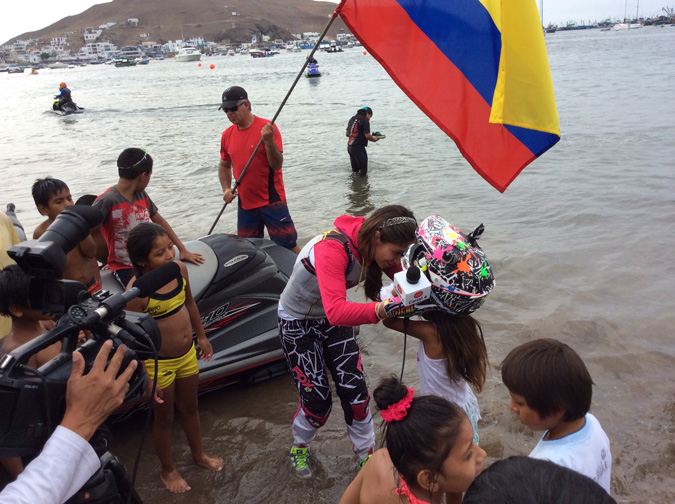 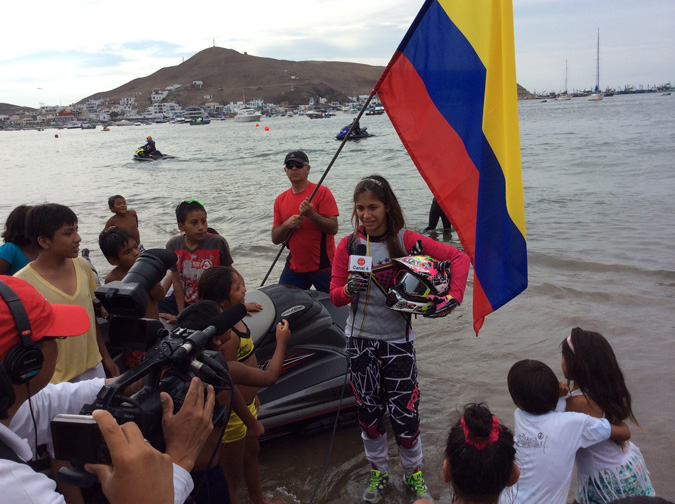 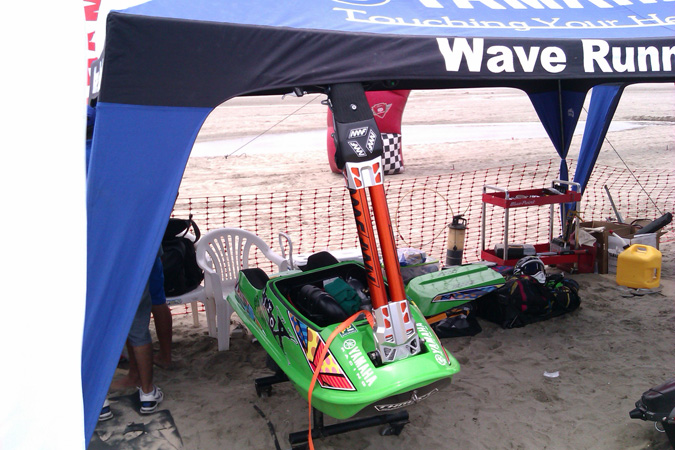 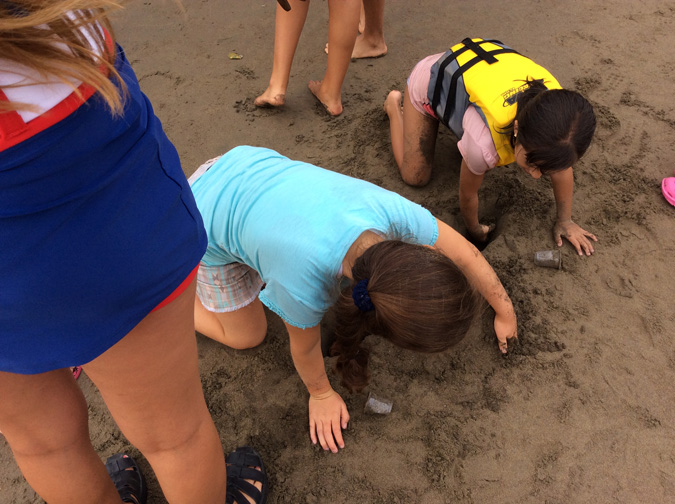 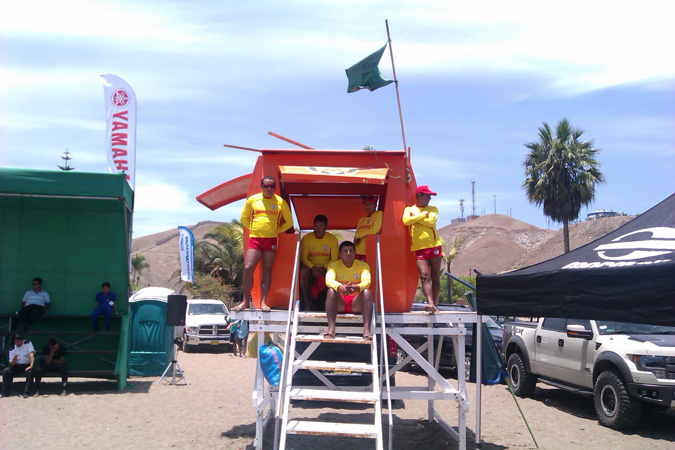