In 1528, Spanish Conquistadors traveled up and down the coast of Peru searching for the glory of gold and spreading the message of their religious beliefs to the native inhabitants.  Centuries later, IJSBA competitors, including natives, traveled up and down the coast of Peru seeking the glory of being the 2015 Jetraid champion and spreading the message that PWC Racing is the greatest sport on the planet.  Days later, IJSBA staff traveled up and down South America seeking internet access good enough to upload the pictures in this story and spreading the message that the AT&T Platinum Passport Data Package was a colossal waste of money in that data wouldn’t transmit anywhere (seriously AT&T, you very much suck). Spain never did get that much gold out of South America but Catholic Churches do, indeed, permeate the landscape of Peru.  Winners of three competition categories absolutely found their conquests in overall titles of the 2015 Inka Jetraid Championship and, based on the racer comments received from competitors, sponsors, and those following online, PWC Racing is absolutely the greatest sport on Earth.  Finally, somewhere at the Houston International Airport, decent enough wifi was found and this article was posted.  AT&T, meanwhile, continues to be an awful service provider.

As always, you can skip the article by downloading the results here:  InkaJetRaidFinalPoints2015

Professional photographs and more information can be found at www.jetraidperu.com

IJSBA left you with quite the cliffhanger two days ago when we proclaimed that, statically, the top three overall points standings were probably decided due to large gap between the apparent podium finishers and the rest of the field.  We also cautioned that stranger things have happened, in this sport, than having a large points lead being diminished into a defeat.  Indeed, this happened, to a degree, with as come from behind surge combined with some unfortunate luck.  Manuel Cherici had equipment problems that totally took him out of the final day of competition.  While this would not affect his ability to retain a podium finish in the F1 Class (single rider), he dropped significantly in overall points due to the scoring in the final day being a double points round.  Also, without Cherici, a hard charging and high scoring competitor was off the field which allowed others to retain higher positions.  It was here that Eric Francis' powerful run in the first heat catapulted them up high into the points lead earning an overall third place for his team.

Teamwork was the mark of success for the Chia/Francis/Davila team.  They played off their strengths with each rider taking the conditions that best matched their talents.  In addition, the team had the services of an expert navigator who programmed the GPS to actually go a longer route than was ideal for the first heat but it was a route that avoided the heavy chop and allowed a much higher overall top speed.  When Francis came through the finish line, at the halfway point, he enjoyed a comfortable lead of more than two minutes.  By the time the race was over, this lead was several minutes.  Good riders, good equipment, and good navigation created the most impressive showing of the event and a win in the F3 Category (three rider class).

What may have been most impressive was that Allain Martin won the overall, and overall F1 class by simply finishing the first heat of Day Eight.  His points lead was that great.  What really demonstrated his winning and competitive spirit was that he still raced Heat Two of day eight even though he had already won the event.  More so, he won the final round of the event.  Very nice.

The F2 category (dual rider class) had it possible for first and second place to remain in play all the way through the event.  The Diaz brothers would keep the win with the team of Vidal/Goncalvez despite finishing ahead the final two heats... it just was not enough.

Hugs and handshakes were all around when the last competitor came in and the competition officially ended.  It was a long time to spend on the road.  Tragedies were few and it seemed like there was room for many individual victories, amongst the entire field, even where riders may not have reached podium.  Respect and admiration was expressed  to each other on the beach and at awards.

We hope you will enjoy these pictures from the final day:

Miguel Gonzales rides an ATV up and down the beach alerting competitors to the start of Heat One of Day Eight.

Last minute concerns and checks by competitors of Heat One of Day Eight.

The Start of Heat One of Day Eight.

The leader of Heat One, of Day Eight comes around the shore buoy before heading out for a longer route.

While these kids’ attention was not focused on the race in progress, it was good to see them playing with only motorsports related toys.  We are certain they will join the party when they are of age.

Teammates and crew cheer as Eric Francis comes in for the win of Heat One of Day Eight. 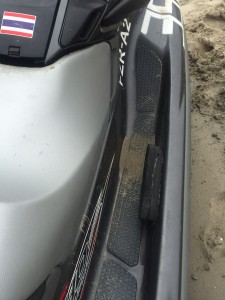 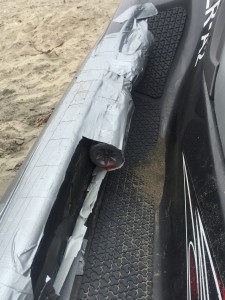 The start of the final race of the competition: Heat Two of Day Eight.

Paloma Noceda and Carlos Torres are interviewed after the event.

Live music was the opening entertainment of the awards ceremony.

A confetti cannon celebrates the winner, much to the delight of everyone…….

….except the person who set his drink by the stage to take these photos and had a nice cocktail contaminated.

Overall winners of the F2 Class:  Chia, Francis, and Davila.

Anthony Ratadic wins third places for the Oris Cup portion of the event.

Overall winners of the F2 Class:  The Diaz Brothers

The Pervian Naval Band plays the French National Anthem to celebrate the victory of Alain Martin.

Alain Martin receives a beautiful Oris Watch for being the overall winner.

A group event completes the celebration.