Double success at World Finals for the Lower Austrian.

This years World Finals attracted once again racers from around the globe to compete at the Colorada river reservoir in Lake Havasu City.

After a Gold and Bronze Medal at Asian Games with Flamingo Teams main athlete Ou Moeut Saly the Team set of to race the event in Arizona. This included the participation of the Austrian Reiterer once again as a trainer and this time as a racer as well for the international Team.

"The decision was made very late so we did not had lots of time to prepare for the race. However, the Team did great.", says Reiterer. 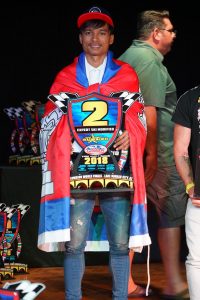 With a second place in EXPERT Ski Mod, Ou Moeut Saly demonstrated an excellent ride against international racers. After pushing for a second potential podium place in PRO AM Ski Stock a bad start in the last Moto and pain in his shoulder led to a DNF. “ I am happy with my podium finish at the World Finals.“ says Ou Mouet Saly. 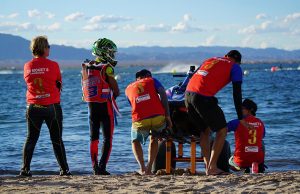 Ou Moeut Saly with his crew shorty before getting on the line.

Compared to Asian Games, Reiterer was able to compete at World Finals and got the chance by Flamingo Team to do so. With a race ski of the Team Reiterer raced on Sunday in the Pro category. Despite bad starts Reiterer raced through the field, passing the best racers, to finish in third overall.

A training race, Reiterer picked up on his way to the final races of the season to be in an even better shape. With China Open, King's Cup and the final round of the ABP World Championship left on the agenda the Austrian has a full schedule till the end of the year. 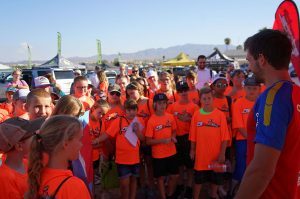 "I had great fun racing and it was an amazing training and preparation for the last races of the season. I can't thank Flamingo Team enough for the opportunity to compete.“ explains the Austrian.

On the 26.-28. of October, the China Open will bring the best racers to Liuzhou China. Including Flamingo Racing Team with their Pro Athletes Ou Moeut Saly, Mustan Min from Cambodia and once again the Austrian Kevin Reiterer.