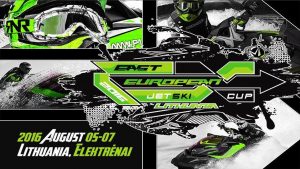 IJSBA has received the notice of the 2016 East European Jetski Cup which will bring fast action to warm weather.  Fresh off the IJSBA European Championships, we expect to find numerous racers at their most competitive condition and their watercraft already tune to perfection.  We have received a Powerpoint Notice as well as an official press release.

August 05 – 07 days for the third time in Lithuania, will be held Elektrenai EAST EUROPEAN JETSKI CUP 2016.

Event organizers said had not been receiving any such interest in the neighboring countries.

Support - the best motivation for those who will turn the wheels, and will raise the waves in the air.