The Martinique Jet Race is the first of a two round Endurance World Championship.  The second round is held, this November 11-19 in Morocco.  This report concerns day one of round one.

Fort de France, the capitol of Martinique (IJSBA Geography Department says: it is actually the only prefecture in Martinique but serves as the capitol), is unusually quiet.  Martinique is a French insular region and, as such, is being affected by the run off election for the Presidency of France.  People are out a little bit less until the election is completed and citizens settle in with the changes in politics.  This is a common occurrence in the various type of democratic elections that are held around the world.  Commerce recently slowed in the United States election cycle and starts to pick up shortly after inauguration.  In a way, this is a great thing for the event as the IJSBA Sanctioned Event is getting much more attention.  However, even at the parade and welcoming parties, the conversations overheard shift back and forth between PWC Racing and politics. 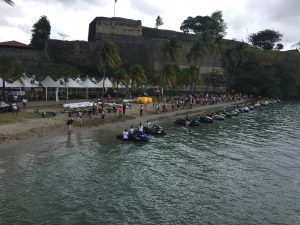 The weather isn't helping much, either, as the weather is much wetter than it was this time last year.  Less vendors are out and the eager spectators are as prepared to run for shelter as they are to shop, dance, and celebrate the activities associated with the event.  Famous organizers have exclaimed the show must go on and, so too must PWC Races.  Race organizers meet their obligations to the athletes that signed up and shipped watercraft long before weather patterns could be predicted.  Weather can also make for more challenging races and this is all part of the formula that makes someone a champion when the persevere- especially when that champion is a World Champion.

As is common in the Endurance and Offshore segments of the PWC Racing Sport, categories are set as Open, Atmospheric, and Grand Turismo which is a shorter race for amateur sportsmen (sportspersons).  Day one began, as it usually does with excited pilots, all hailing from many different nations around the globe, preparing for the first start.  Sadly, as is also often the case, this some competitors' first day dealing with mechanical difficulty and disappointment.  Some racers fail to actually enter the race due to equipment issues while other make it to the start only to encounter a heartbreaking setback due to equipment failure before the finish.  At the end of Day one, the familiar team of Pastorelloss and Botti lead the field but, just a few points behind are a Caribbean team of Granger and Granger, from Guadeloupe, home of Karujet, who are intending on trophies and titles staying in the Antilles.

Full results from day one are as follows: