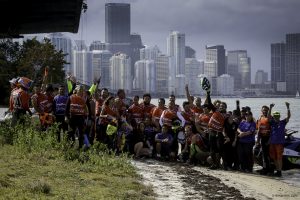 April 21st and 22nd Miami’s Marine Stadium came alive with the return of marine motorsport on its waters after 26 years of standing dormant as a result of Hurricane Andrew that tore through the area in the early 1990s.
The world's premier one-design powerboat championship, P1 Super Stock and the biggest and baddest personal watercraft race series, P1 AquaX, made waves at the iconic venue and made history by breathing life back into the venue.
Throughout the weekend, riders and drivers from the amateur and professional world of powerboat and personal watercraft racing, competed in the hotly anticipated event. 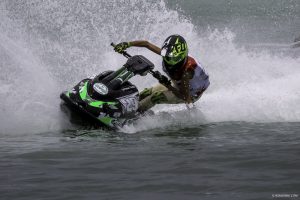 AquaX Sprint Jr rider, Haden Skellett made a huge statement with a dominant weekend and has to be the one to watch this season.
A vast number of spectators gathered at the venue bright and early on the Saturday to see action the P1 SuperStock and P1 AquaX unfold.
All eyes were on the AquaX Sprint riders on Saturday where Jr Ski rider, Haden Skellett came out swinging. Sam Nehme, who schooled the Sport GP class by taking first and David Cabrera come up trumps in the P1 AquaX Ski Pro and Robert Sayah quashing the competition in the Sport Spec. The Spark / EX class put on a great show with AquaX Sprint class new comer, Justin Bellinzoni taking the top spot. 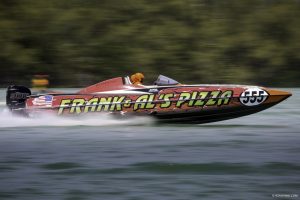 On Sunday drivers and navigators from the P1 SuperStock and P1 AquaX Enduro riders, returned and, due to the amended schedule, the spectators were treated to even more of a jam-packed day of action.
Six P1SuperStock teams took on the 30-minute course but only one team could reign supreme and that was current Championship title holders, Frank & Al's Pizza, with GEICO Racing coming in second and Visit Jacksonville taking third. All eyes will be on Frank & Al at the next event in Kissimmee this May to see if they can retain their winning streak. 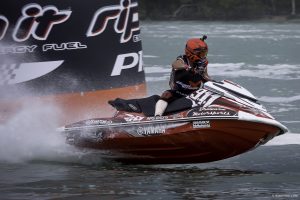