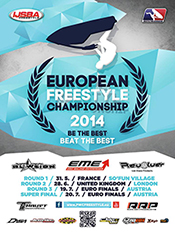 Attention all freestylers, online pre-registration to compete in European Freestyle Championship is now open. First stop of the Championship on 31 of May will take place in Paris area in popular location of So'Fun Village, France.

And for the Round 3 and Super Final will freestylers join forces with racers in Austria during first ever EuroTour Finals on 19 and 20 of July.

Video Teaser of Round 1 of 2014 European Freestyle Championship