This Friday, April 21, The P1 group will hold a media only press event, in Daytona Beach, Florida.  Even though the event is not open to the general public, we wanted the public to be aware of the extra publicity that our sport is getting courtesy of Azam, Michelle, Lisa, and the rest of the P1 crew. 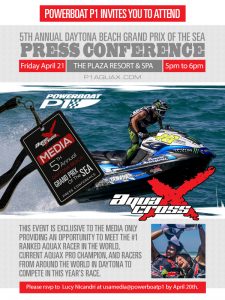 P1 AquaX Racing Returns To Daytona Beach April 22-23 The world’s best jet ski riders will descend on Daytona Beach for the  opening round of the P1 AquaX and P1 Jetcross race series.

AquaX racing roars back to Daytona Beach next month for the 5th Annual Daytona Beach Grand Prix of the Sea on April 22-23, 2017.  This year’s event is the opening round of the P1 AquaX USA Pro Championship and the premier race site for P1 Jetcross, Europe’s leading personal watercraft (jet ski) series for stand-up circuit racing. Jetcross is a high-speed all action sport full of fast turns, air-time and power and it’s coming to the USA for the first time in Daytona Beach.

Over 100 racers, including the best from around the world, will compete at speeds of more than 70 MPH in the Daytona surf in front of the Plaza Resort & Spa. The event is free to the public with non-stop race action from 10:00 am - 4:00 pm each day. Fans will be able to meet the racers and see the powerful skis up close in the P1 race village and grandstand on the beach in front of the Plaza as well as enjoy food and drink from vendors in the P1 beer garden, with all proceeds benefitting the Special Operations Bionic Warriors who provide assistance to wounded military personnel.

Amongst the race favorites will be last year’s AquaX Pro champion, Chris Macclugage, and world number 1 ranked racer, Aero Aswar.  "Daytona Beach is one of the best racing venues on the circuit, and is my favorite place to race”, said Aero. “I know there are some racers who have their sights set on my world #1 spot; however, I will try my best to keep that position and win the overall championship.”

“Seeing this event grow over the past four years, is testament to the growth of P1 AquaX as a sport which delivers a significant impact to the local area”, said P1 USA Director Azam Rangoonwala. “Top names in personal watercraft racing will be descending on Daytona in a few weeks and they are coming from all over the world. With the inclusion of P1 Jetcross, Daytona is fast becoming the world’s leading personal watercraft race destination. We have racers from 12 countries including Canada, France, Indonesia, United Kingdom, Peru, Germany and Italy and it will be broadcasted on major sporting networks to more than 150 countries”, added Rangoonwala.

For more information and updates visit: p1aquax.com or p1jetcross.com The racing will be live streamed on facebook.com/p1aquax and facebook.com/p1jetcross Catch all the highlights from Daytona on FOX Sports Florida.