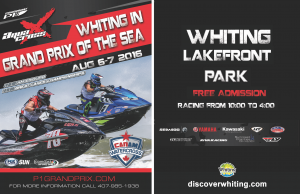 P1 AquaX Amatureur Enduro Race A Success In Whiting
P1 AquaX completed its first round of the 2016 AquaX Amateur Enduro Great Lakes Championships over the weekend on the southern shore of Lake Michigan.  Powerboat P1 USA, joined by the CanAM Tour, resulted in 65 racers from all over the U.S. and Canada participating as spectators watched from Whiting Lake Front Park. 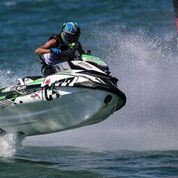 Finishing in first place in the first round of the AquaX Great Lakes Championship was Jay Edworthy (Canada), followed by Tommy Olswang (Tampa, FL) in second place, with Chris Saxon (Orange Beach, AL) placing third.  Racers competed in 5 ft. seas on Saturday with much calmer conditions on Sunday with 2-3 ft. waves.

“A special thanks to the City of Whiting, IN for their tremendous support with this inaugural race. Our P1 AquaX  Enduro series has grown quite considerably since 2013 in the USA, and we are excited to be expanding and bringing the series to the Great Lakes region.  We plan on developing and growing the series in this region and integrating it into our global event plan”, stated P1 USA Director, Azam Rangoonwala. 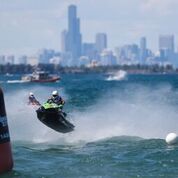 The second round of the exciting Great Lakes Series is Chicago, IL on September 10-11, 2016.

This race will serve as the Closed Course National Finals for IJSBA (International Jet Sports Boat Assoc.) as well as the Pro Enduro Championship.

For more information about this event visit:  p1aquax.com or powerboatp1.com  Suncoast Charities for Children is the official charity partner for Powerboat P1 USA.