The P1 Aqua X Sarasota Florida event is a major spectacle.  It is well attended, has lots of spectators, and they even have a huge event parade.  It is very nice to see that kind of enthusiasm for Personal Watercraft Racing.  Below is the press release from P1 as well as results from the

Riva Racing’s Brian Baldwin picked up his first weekend victory of the 2017 season in a weekend full of controversy.

After results were adjusted because of a timing error in the only race on Saturday, only one race could be completed because of marine delays on Sunday and Baldwin took advantage as he put in a consistent performance amongst a real mixed bag of results for a number of the top riders.

Sea-Doo star Erminio Iantosca picked up second place but will be disappointed to have not taken top spot after his win in race one was followed up by a 14th placed finish in race two.

The world number one and reigning champion Chris MacClugage put a DNF in race one behind him to land his fourth race victory of the season and with it the final spot on the podium, just knocking Frenchman Cyrille Lemoine off the third step on countback.

There was controversy before podium celebrations as Ford rider Eric Lagopolous was disqualified due to a technical infringement after securing enough points for a podium spot.

Chris Saxon was once again the top rookie as he finished inside the top five with consistent performances whilst others struggled around him.

GEICO sponsored racer Jason Russo was another who posted a seasons best as he finished sixth, featuring in perhaps the best battle of the weekend in which he came off second best in a coming together with Baldwin in race two.

Denmark's Marcus Jorgensen was another who put a disappointing opening race behind him to finish an impressive second in race two and that pushed him into a top ten finishes.

Eric Francis was another who improved his position on Sunday but yielded second to Jorgensen because of a mechanical issue on the final lap that saw him limp home in third – eighth for the weekend overall.

Jay Edworthy (8th) and Tommy Olswang (10th) were the final names to make it inside the top ten.

With just two races completed four races will now be scheduled for round four in Islamorada on 19/20 August to ensure the championship will remain at 18 races.

Re-live all the action with our Facebook live stream! 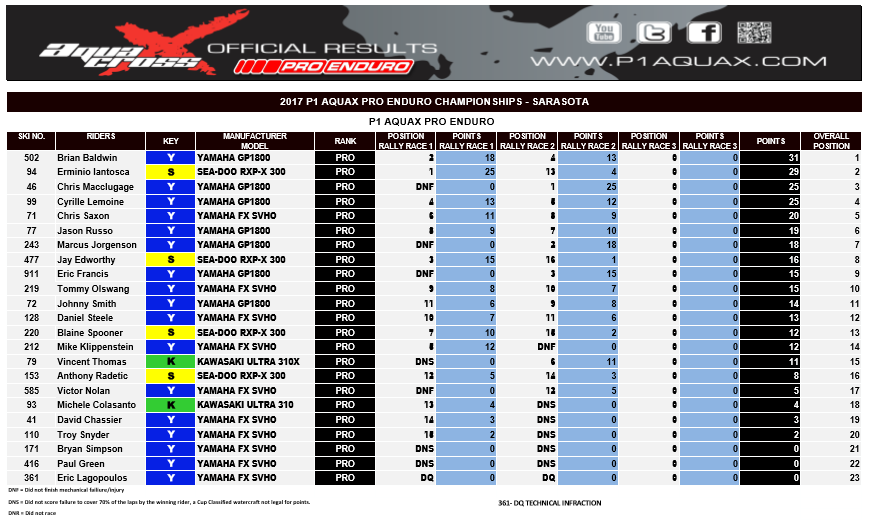