We always get great emails from PWC surf legend, and IJSBA Hall of Famer, Randy Laine.  Yesterday, Randy and Gavin Fridell-Laine were out riding in  Oceanside when this ocean dweller came up to join them.  These pictures and video are very awesome.  Here is the story straight from Randy: 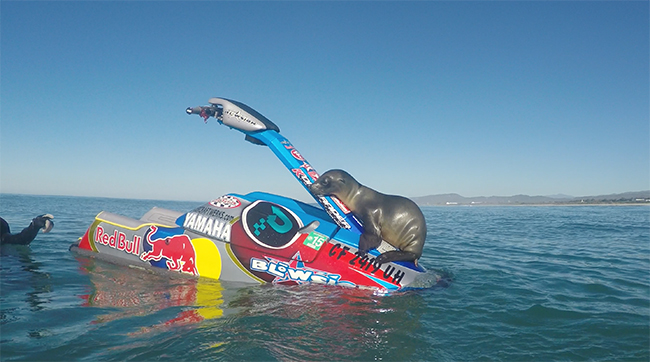 The local Oceanside Crew adopted a new FreeRider Seal Pup and his name is 'Shark-Bait'.

Shark-Bait is a baby sea Lion Pup who was discovered by Randy Laine while Freeriding in the surf at Oceanside.

The baby Seal Pup is fearless and playful and followed R L over to the other local riders floating on Stand up Skiis in the surf line up. 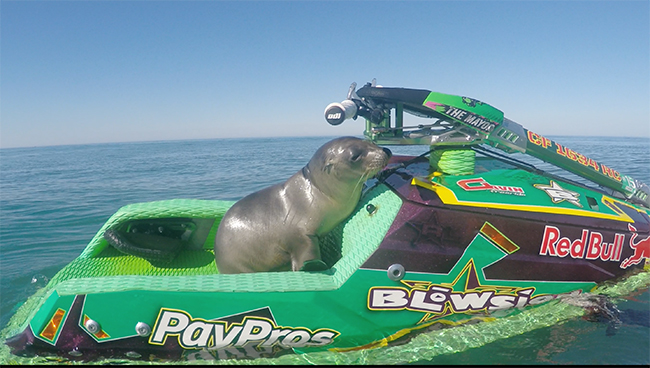 Shark-Bait climbed on Gavin Fridell-Laine's RICKTER and began hanging out, getting on and off Gavin's ski.

Shark-Bait then decided he wanted to try Sean's Superjet, then Mark Gomez's new Rickter Ski with a 1000cc DASA, and finally Shark-Bait got tired and decided to take take a nap on the front of Randys Blowsion Superjet.

Shark Bait hung out and played with the FreeRiders for about 15-20 minutes 'testing' several different Freeride Skiis.

The Sea Lion Pups are now coming to the Oceanside Freeride area regularly as two baby Seal Pups were there today in the surfline with the Crew.

Shark-Bait is proof that PWC's and Wild Marine animals can play together and get along just fine.

seal from gavin fridell on Vimeo.