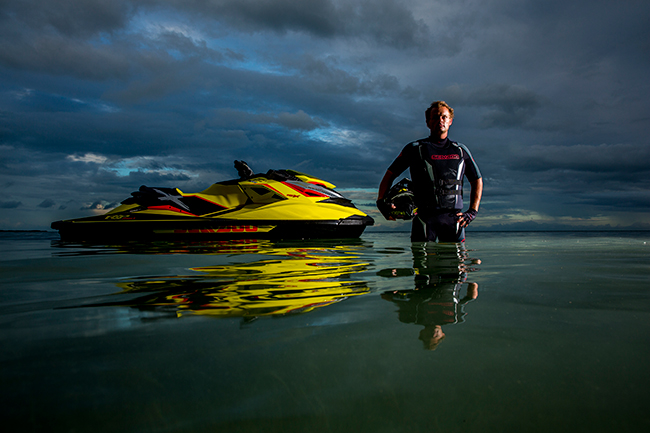 Sea-Doo X-Team Comes To The IJSBA World Finals To Add To The Championship Count and To Offer The Ultimate Fan Weekend.

BRP is bringing the world leading Sea-Doo X-TEAM to the 2014 IJSBA World Finals to defend the historic number of racing World Championships claimed in 2013. The Sea-Doo events team will Spark Some Fun during the World Finals, taking place in Lake Havasu City, AZ, from October 8th to 12th, orchestrating numerous Sea-Doo related activities for Sea-Doo X-TEAM racers and enthusiasts alike.  The Sea-Doo X-TEAM returns to Lake Havasu to defend 21 World Championships captured by Sea-Doo RXP-X 260 over the past three years.

The IJSBA World Finals is the largest watercraft specific event in North America where the best racers from around the globe converge to compete for World Championships. The event takes place at Crazy Horse Campgrounds in Lake Havasu City, AZ and draws 15,000 spectators every year. BRP is the leading supporter of watercraft racing through the Sea-Doo X-TEAM Bounty racer contingency program and the Sea-Doo X-TEAM Promoter support program.

With the dominating success of the Sea-Doo RXP-X watercraft, BRP comes to the 2014 World Finals with fun fan activities and special X-TEAM initiatives. Sea-Doo race fans and general enthusiasts alike will be treated to an entertaining experience. 2014 Sea-Doo World Finals efforts will include:

SEA-DOO #GOXTEAMGO ZONE – The Sea-Doo #GOXTEAMGO Zone will headline the IJSBA World Finals Performance Alley with a full, interactive display of the all new 2015 Sea-Doo X-Series models and the popular Sea-Doo SPARK.

Sea-Doo #GOXTEAMGO CONTEST – Sea-Doo fans who follow @BRPSeaDoo on Instagram, Twitter and the Sea-Doo Facebook page will have the opportunity to show their Sea-Doo X-TEAM pride during World Finals week and could win one of two Sea-Doo X-TEAM gear packages. For full contest details, go to the Sea-Doo social channels in the coming weeks.

SEA-DOO ULTIMATE OWNERS RIDE IV – The world’s largest personal watercraft event will be joined by the premier Sea-Doo Ultimate Owners Ride IV on Saturday, October 11th. Sea-Doo enthusiasts can enjoy an action filled Sea-Doo weekend by experiencing one of the most beautiful, one-day leisure, boating rides in North America, and watching the best watercraft racers in the world compete for Pro championships on Sunday. The ride will depart from Site Six Launch ramp at 8:30 AM and travel up the Colorado River to Pirate Cove Resort for a sponsored Sea-Doo lunch stop and exclusive VIP seating for the Sunday Pro Finals behind the #GOXTEAMGO zone in performance alley. Open to Sea-Doo owners*, participants will get a special owners ride event hat, food, and be eligible for Sea-Doo giveaways. For more information, write to info@look-marketing.com.

SEA-DOO BOUNTY #GOXTEAMGO SPARK CHALLENGE – Elite Sea-Doo racers (noted below) who have landed on podiums during the 2014 season are being invited to compete in a special International Race Of Champions (IROC) aboard identically prepared Sea-Doo SPARK watercraft. The field of ten will qualify Friday evening, October 10th, with the fastest five riders on the slalom course moving on to the final. On Saturday night, those final five X-TEAM riders will compete head-to-head in a five-lap moto during the IJSBA “Bounty Under the Bridge” show, under the London Bridge. Then, on Sunday October 12, Sea-Doo racers will need to complete another three-lap moto 2 on the official World Finals track. The winner of the combined motos will take home $1000 while the other four competitors will claim $100 for their efforts.

Visit www.facebook.com/seadoo for the most up-to-date information regarding BRP’s 2014 IJSBA World Finals activities.

For a look at the new 2015 Sea-Doo watercraft and riding gear, visit www.sea-doo.com