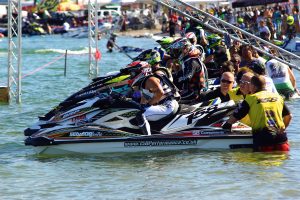 The IJSBA World Finals is taking place October 3-9, 2016 in Lake Havasu City, Arizona and is renown as the largest watercraft specific event in North America where the best racers from around the globe converge to compete for world racing championships. The event takes place at Crazy Horse Campgrounds and draws 15,000 spectators every year. BRP is the leading supporter of watercraft racing through the Sea-Doo X-TEAM Bounty racer contingency program and the Sea-Doo X-TEAM Promoter support program.

2016 Sea-Doo World Finals efforts will include:

Visit www.facebook.com/seadoo for the most up-to-date information regarding BRP’s 2016 IJSBA World Finals activities.

For a look at the new 2017 Sea-Doo watercraft and riding gear, visit www.sea-doo.com

*All Sea-Doo Ultimate Owners Ride VI drivers must possess a valid driver’s license and must be 18 years old or older and utilize a 2002 or newer, four-stroke Sea-Doo watercraft. No other watercraft brands are permitted