Thousands of spectators gathered on the white sands of Florida’s beautiful St. Pete Beach Father’s Day weekend to see high-speed action unfold.  Spectators were certainly not deprived of action as some of the world’s greatest riders took to the water for the AquaX Enduro Pro race. 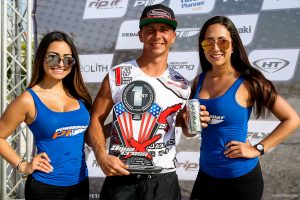 After some intense racing, nail-biting competition came in the form of the current AquaX World ranked number one, Eric Francis, who battled it out for the win in race 1. Despite a slow start, Eric snatched the lead on the second to last lap pipping reigning P1 AquaX world champion, Brian Baldwin, and series favorite, Chris MacClugage, to the post. 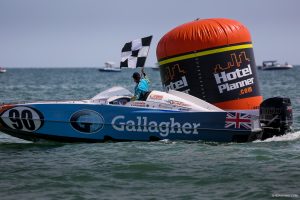 The penultimate race for the entire P1 SuperStock series, all the pressure was on the shoulders of drivers and navigators to maintain their form before heading into the final race in Sarasota on 30 June. This pressure pushed team Gallagher, into the lead. GoToSteves.com pulled off a win in race by racing smart and slick maneuvering. Race 2, Team Gallagher took back that was theirs by taking the checkered flag.

Over all win for the weekend went to Team Gallagher followed by GoToSteves.cm and rounding out the podium, Team GEICO. 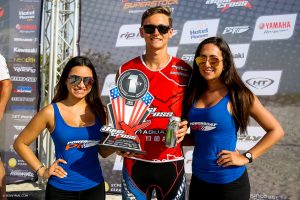 Although the Pro Enduro is P1’s headlining class for the series, the Amateurs did not fail to please the crowds. In spite of rough race conditions, the Amateur class rode a hard race and put on a spectacular show.  Canadian and JetX team rider, Dave Davidson rode an excellent race and managed an overall third place with Tommy Olswang second.  New to AquaX, Team Visit St. Pete rider, Tyler Hill managed to take the overall victory with a text book win

The Amateur 200 Class brought some new and returning faces to the podium.  Another first time AquaX rider, Jeff Therrien came out the gate swinging with an overall 3rd place on board his Kawasaki 15F.  The second step went to another new racer to the series, Ben Mantel with former P1 AquaX Champion, Scott Reeves, returning to the top of the podium. 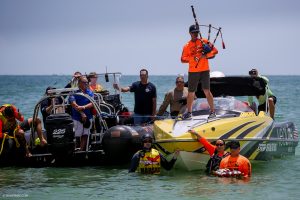 On Saturday, and under the basking sunshine, tributes were paid to Sanford Firefighter, Lt. Mike Salber.  Family, friends, colleagues and members of the racing community came together on the shoreline to honor Salber, who was also a SuperStock driver. The heartfelt tribute saw Mike’s son, and fellow powerboat enthusiast, Zane Salber, lay flowers on the water while P1 Safety director, Chief Mark Austin played bagpipes as is tradition in honoring a member of the fire-fighting community. 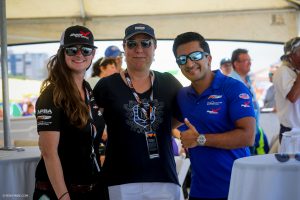 This is the second year in which P1 has hit up St. Pete Beach and Azam Rangoonwala, CEO of Powerboat P1 said: “We love bringing the sport out to St. Pete Beach because they offer us such a great venue and provide great close-to-shore racing for the thousands of spectators flocking the white sandy beaches. Partnering with Visit St. Pete /Clearwater offered us such a great atmosphere for both working and racing and we cannot wait to return next year. I would also like to take this opportunity to thank all of the fantastic sponsors who joined us over the weekend, without whom our events just wouldn’t exist.”

The sponsors Azam speaks of refers to the number of local and National businesses who came out in force to support the event. These included; hotel booking service, Hotel Planner, tourist board, St. Pete/ Clearwater and energy drink brand, Rip It Energy. Sponsoring personal watercraft manufacturers, Yamaha, Sea-Doo BRP and Kawasaki also joined the crowds.

The next stop for the P1 Staff will be Sarasota Powerboat Grand Prix June 30th and July 1st and will be livefee.