IJSBA has received the following press release from Team Dardillat. 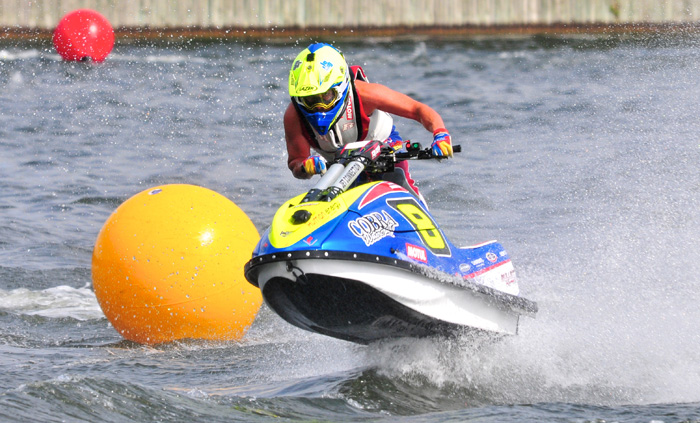 On the 24th August, the contenders for the Jet Ski European Championship title had their last appointment in Doncaster, UK. Valentin Dardillat, having won the previous events, approached the final equipped with a comfortable lead and therefore had no pressure. Winner of two of the three rounds, the official Cobra Watercraft rider confirmed his supremacy by winning his second consecutive European title. Now Valentin is concentrating on the biggest goal of his season; the World Championships will take place in Lake Havasu City, USA, on the 12th October.

How did the final of the European Championship go for you?

Valentin Dardillat : "I approached the race in a fairly relaxed way. My lead in the Championship gave me enough margin to be sure of the win but to tell the truth, that wasn't what I wanted! Almur Bin Huraiz, the rider from Dubai, imposed a fast pace and was on the attack. He arrived at the race with a powerful machine that was unbelievable! It was impossible to get in front of him on the start so I had to attack hard. My team had worked a lot on enhancing my hull. I had loads more maneuverability. This helped me to compensate for lack of speed and I was able to get past. I won the first moto but in the second, I made a mistake by hitting a buoy and only finished fifth. In the final moto, Almur was in the lead but his engine broke and I was able to take the win."

How do you rate your overall performance in the European Championship?

VD : "It's a Championship that only has three meetings. Early on, I felt a lot of pressure because with so few motos there's no room for error. I also wanted to defend my title! I won all three competitions with a real satisfaction because I worked really hard during the Winter to achieve my goal. Another positive point was that I moved up a step physically. Since the beginning of the season I rode at 100% without getting tired towards the end of each race. That's every rider's priority at this level of competition."

What's next on your program?

VD : "I'm going to Avignon on the 13th September to participate in the final of the French Championship. It doesn’t matter where I finish as I'm not in the running for the title. My goal is to stay in 'race mode' during the run up to the World finals in a month and a half. I hope that everything will go better this time. Last year, I had major mechanical problems that took away any chance I had to fulfil my ambitions. This year, I want to make sure that everything goes my way. "