Win The Ultimate Beach Party Courtesy Of Sea-Doo And Supertramp 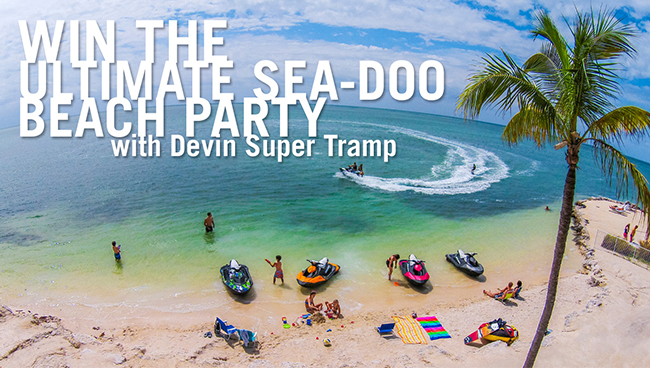 BRP is working with famed YouTube filmmaker Devin Super Tramp to bring the dream of owning a Sea-Doo watercraft to the masses with the #SPARKSOMEFUN Ultimate Sea-Doo Beach Party Sweepstakes.

In 2014, BRP teamed up with Devin Super Tramp (Devin Graham) as part of the launch for the Sea-Doo SPARK watercraft in a wakeskate video with the NIKE wakeskate team that has been viewed over 1.8 million times. This year, BRP is again teaming with Devin Super Tramp to showcase how fun and easy it is to live out their dream of owning a Sea-Doo watercraft by creating the Ultimate Sea-Doo Beach Party. The winner will realize his dream as the event will then be filmed and showcased early this summer.

The Ultimate Sea-Doo Beach Party sweepstakes asks fans to share an image or video, up to 15-seconds, showing how they like to Spark Some Fun. People enter by visiting sea-doo.com by either desktop of mobile or posting an image or video on Twitter or Instagram and tagging it #SPARKSOMEFUN. The entries are collected in a gallery for all to see and after the collection period ends the top five entries will be put up for fan vote with the entrant receiving the most votes being named the winner.

The winner will receive a new Sea-Doo SPARK watercraft and he and two guests will join Sea-Doo X-TEAM riders and wake athletes at the Ultimate Sea-Doo Beach Party in South Florida while Devin Super Tramp will capture the fun in 4K for an upcoming video feature.