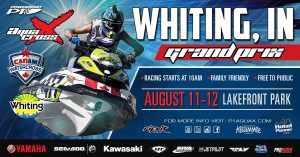 3rd annual P1 AquaX Whiting Grand Prix opened up with a bang as some of the top PRO/AM racers from all over the USA and Canada met for a serious showdown. 300 Class rider and JetX racer, Jay Edworthy, was the favorite coming into the event as the defending Champion of the North East Region. However, Edworthy took a few spills in race 1 which hurt his chances for a race 1 win. Eric Lagopoulos led the pack for the majority of the race with Chris Saxon and AquaX new comer, Tyler Hill hot on his heels the entire race. Saxon kept the pressure on Lagopoulos and managed to pass the former AquaX Champ late in the race. Hill pulled off an impressive 3rd place in race 1. Canadian Dave Davidson worked his way through the pack and finished with a respectable 4th place. 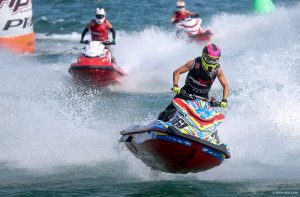 Race 2 Lagopoulos took the holeshot and managed to fend off Hill and Saxon with a comfortable lead. The battle going on for 2nd between Hill and Saxon is where the race took place. Hill managed to keep Saxon at bay with his strongest AquaX finish yet. Saxon took third with Edworthy rebounding from a rocky race 1 with a solid 4th place in race 2. 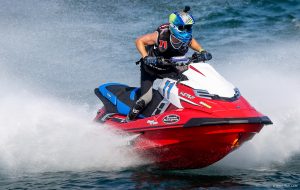 Sunday brought an unfortunate end to Tyler Hill’s blaze of glory as he suffered mechanical issues taking him out of the game for the rest of the day. Lagopoulos and Saxon, again battled for 1st and 2nd place. Dave Davidson capitalized on Hill’s misfortune by bringing Canada a 3rd place finish. Lagopoulos maintained a strong race 4 until Saxon, again managed to pass Lagopoulos for the win but it was not enough to take Lagopoulos off the top spot for the weekend. Saxon brought home 2nd place overall with Dave Davidson finishing a solid 3rd. Rip It rider and SeaDoo racer, Anthony Radetic finished 4th overall which is his strongest finish for an AquaX event yet. 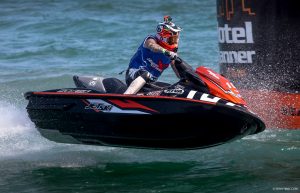 The 200 Class overall win went to another AquaX Enduro new comer, Errol Lange, who made his runabout racing debut this weekend. Lange, predominantly a stand-up racer stated, “I had a great experience for my first P1 AquaX Race! The transition from closed course to endurance was smooth, thanks to the P1 staff and fellow racers.” When asked how he prepared for the transition Lange replied, “I spent some time training on my Kawasaki STX15F with Jason Lester from the St. Pete / Clearwater team in preparation to racing my first runabout endurance race and the rough conditions in Whiting. Such a great experience and I’m really stoked for Chicago. Much thanks to Jason Lester and Ray C’s Extreme and Dave Rossi for providing me the Kawasaki STX-15F to compete on.” 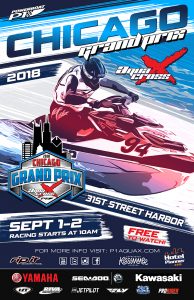 The next round will be the Chicago Grand Prix which will feature round 4 of the Pro Enduro class and round 2 of the North East Region Pro/Am class, September 1st and 2nd at the 31st Street Harbor, Chicago.