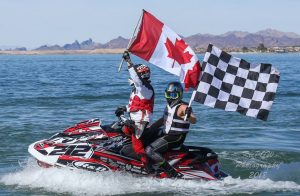 In addition to the overall win in Open class, Yamaha riders Chris Fischetti and Tony Beck won the manufacturer’s stock class aboard their Yamaha GP1800.

“Never has a new model won so many major titles in its first year of introduction as we’ve seen the GP1800 accomplish this year,” said Yamaha Race Director Scott Watkins.  “From World Titles, to its Top 3 dominance on the National Tour and victory at the Long Beach open ocean race, the GP has won every major closed course and long distance race event it’s competed in.  This speaks volumes about this model’s strength right out of the box and it’s only going to get more interesting as our teams have a chance to build upon the amazing stock platform.” 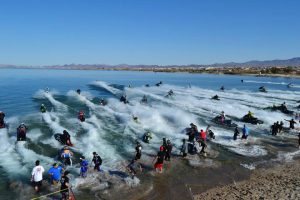 The Mark Hahn Memorial race, which drew a record number of teams from around the globe as well as the top PWC racers, demands that racers manage everything from fuel stops, rider changes, rough water conditions and attrition to complete the grueling 300-mile course.

The “Team” format features two riders for runabout (sit down) boat teams and up to three riders for a stand-up craft. Solo riders are also welcome to “Ironman” the race on either style of boat, a real test of endurance and stamina reserved for only the true endurance sea lots.

“We won this event in 2005 on a two stroke Yamaha GP1300R with teammate Billy Womack,” said event promoter Mike Follmer. “I am proud to now welcome Mike Klippenstein and Marcus Jorgensen to the Yamaha Winners club.  They put forth an outstanding team effort in conjunction with R&D and the entire Klippenstein team on their GP1800.” 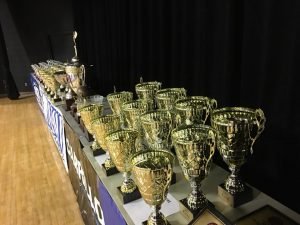 The race is held in the memory of endurance racer Mark Hahn who was instrumental in supporting and growing the sport of personal watercraft endurance racing around the country.