IJSBA has received the following news from the organizers of the 2016 Hot Products Mark Hahn 300: 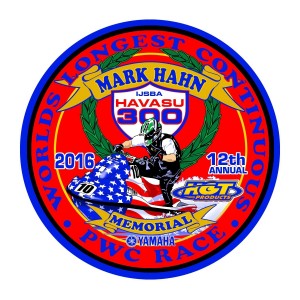 Now in its 12 th year in Lake Havasu City, Ariz., the internationally-attended 300-mile race is considered one of the sport's premier events and a favorite for Yamaha high-performance watercraft owners.

"The Hahn 300 is a top-tier PWC event in the U.S. that not only attracts the top professional racers in the sport, but it's also open to novice riders looking for an exciting venue to test their skills," said Andrew Cullen, digital marketing and communications manager for Yamaha’s WaterCraft Group. "The event aligns itself perfectly with Yamaha's high-performance WaveRunners and the durability and reliability that the Yamaha brand is revered for."

Slated for Feb. 27, 2016, and held annually at the Crazy Horse Campgrounds, the Mark Hahn Memorial Havasu 300 was created in memory of endurance racer Mark Hahn, who was instrumental in promoting endurance PWC racing across the country before his untimely death in 2004.

The "team" format allows two riders for runabout, or sit-down, teams and up to three riders for a stand-up watercraft.  Solo riders are also welcome to "Ironman" the race on either style of watercraft, which is the ultimate test of endurance and stamina.